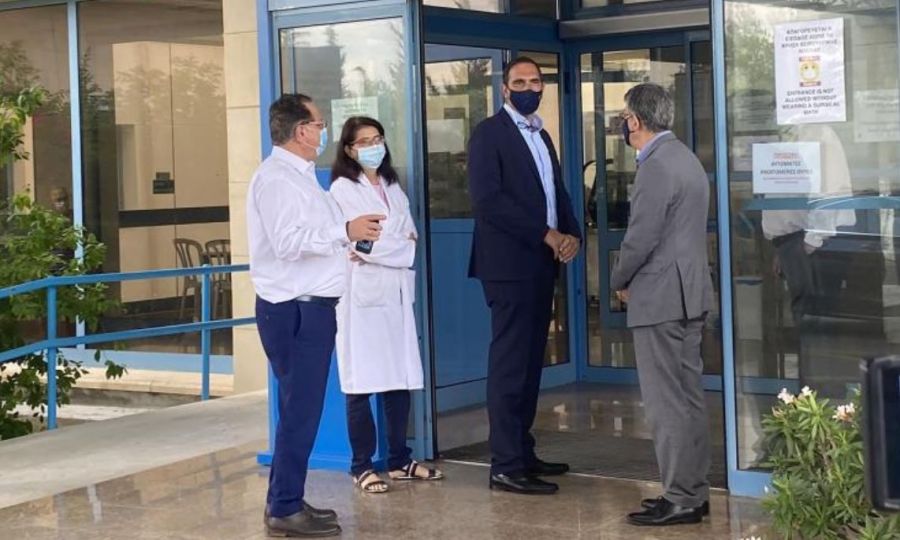 Health Minister Constantinos Ioannou is calling on younger groups to get vaccinated, suggesting the vast majority of cases or hospitalizations were citizens who have not been jabbed, while a local expert points to lack of data on mutations as also worrisome.

Ioannou on Tuesday visited Famagusta General Hospital, which was designated as a referral hospital during the pandemic, telling reporters there that he was concerned about the increasing number of new cases.

According to the Cyprus News Agency, Ioannou said the positivity rate had doubled, noting this was causing concern as interest amongst citizens to get jabbed had gone down.

“Personally I’m worried because in the last few days there has been an increase in the positivity rate especially in rapid tests that show more direct results,” the minister said.

Ioannou said the government was calling on more people to book vaccine appointments but also follow social distancing measures, saying “cases now are being detected in groups under the age of 30 where there isn’t yet an adequate coverage.”

But lack of data in the Republic of Cyprus regarding the spread of coronavirus mutations has added some confusion to the minister’s message.

Local news outlets recently reported on evidence suggesting the Delta variant, the latest mutation of what has been known in the media as the Indian variant, could be associated with a higher risk of hospitalizations compared to earlier strains.

Pharmaceutics professor Christos Petrou, who headed in the past the health ministry’s drug safety department, has warned that despite good epidemiological conditions in the Republic, there could be a setback if wrong steps were to be taken.

Petrou, who spoke on state radio Tuesday morning, said there was a need for more careful testing at Points of Entry, while also calling on officials to be cautious as they sought a lift on a ban of Russian charter flights to the island.

The professor said he was very worried about the lack of information regarding the transmission of the Indian mutation.

“They announced a couple of cases back in April but since then there has been no additional information,” Petrou said, while also questioning some of the specifics of the data provided two months ago.

Last month additional information was taken out of the public sphere after the health ministry stopped reporting on the vaccination history in Covid-related deaths, citing difficulties over providing a full picture in each case due to privacy concerns.

Ioannou provided no clarification whether the increase in cases involving unvaccinated citizens involved people who were detected as cases or patients who have been hospitalized.

On Monday, the health ministry said there were 46 patients in state hospitals across the Republic, 19 of whom were in a serious condition. Eleven were intubated in the ICU, one of whom was breathing without the help of a ventilator, while 8 others were being treated in advanced care units.

Media reports in Israel said Monday that about 70% of new cases in the neighboring country were infections with the Delta variant, with officials noting that half of those infected were children, and a third of those infected had been vaccinated.

But Petrou went on to point out that the Pfizer and AstraZeneca vaccines were “highly effective” against the virus, while also helping in decreasing hospitalizations.

The delta variant was first discovered in India and is considered highly contagious.