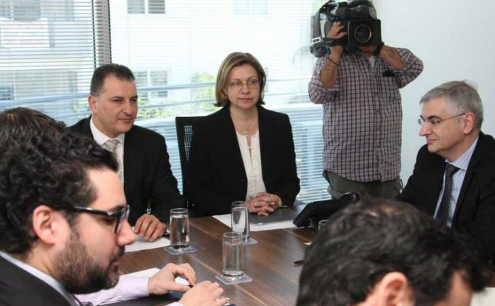 Cyprus will await the outcome of offshore drilling this year and the next before deciding on a potential new licensing round, says the Energy Minister.

Discovery of additional hydrocarbons in current offshore concessions would boost interest – and thus the economic benefits – in a future licensing round. Energy Minister Lakkotrypis said the government iswaiting for ENI-KOGAS to identify specific dates on which they would bring a drilling rig to Cypriot waters. The Italian-Korean consortium is planning to drill its first exploratory well in the second half of this year, sometime during the summer, he said.

Meanwhile Noble Energy would conduct prospecting in their Block 12 concession in the last quarter of this year, and French energy major Total expects to start drilling in mid-2015. Lakkotrypis was speaking to reporters after meeting with the new board of the Cyprus Hydrocarbons Company (CHC). For her part, CHC chairwoman Toula Onoufriou said that the company would soon begin contacts with concession-holders, which have expressed an interest in the development of an onshore natural gas liquefaction plant.

Lakkotrypis also met with Yiannis Maniatis, Greece’s Minister of Environment, Energy and Climate Change. The two ministers discussed energy cooperation, in particular the proposed East Med pipeline, for which Greece recently commissioned a feasibility study. The project seeks the construction a pipeline connecting the Leviathan field offshore Israel, to Cyprus and the eastern part of the island of Crete in Greece. In order to connect the supply of this pipeline to the EU market alternate routes are possible, including connections from Crete to the Trans-Adriatic Pipeline (TAP), the Interconnector Greece-Bulgaria (IGB) and the Revythousa LNG terminal close to Athens.

The pipeline project is being talked up by Greece as it seeks to become a transit point for Eastern Mediterranean gas going to Europe. Lakkotrypis and Maniatis agreed to set up joint work groups to discuss this project and energy cooperation between the two nations in general.

Lakkotrypis said Cyprus is “interested” in the East Med feasibility study, which would elucidate the potential areas in Greece to which LNG might be delivered. But there was a hint of dissonance in his remarks, as Lakkotrypis reiterated that an onshore LNG plant remains a “strategic priority” for the island.

In a report last year, Italy’s ENI assesed that the East Med Pipeline may cost up to $20 billion and is not a feasible project. By contrast, an LNG plant might carry half that price tag. Given the enormous costs, the two projects are most likely mutually exclusive.

The Israelis’ approach to the East Med project has been lukewarm. During a visit to Athens earlier this month, Israeli foreign minister Avigdor Lieberman said any decisions regarding natural gas – be it by pipeline or otherwise – rest first and foremost with the private companies and investors.

In the meantime a farm-out agreement to sell 25% of the rights in Israel’s Leviathan gas field to Australia’s Woodside Petroleum was expected to be signed in Jerusalem last night. The signing ceremony was however delayed due to Woodside’s objections to the formula for taxing exported gas as recommended by the Israeli government.

The amount of gas slated for LNG exports will not exceed four trillion cubic feet (tcf), 20% of Leviathan’s commercial reserves. The rest of the gas is intended for customers in Israel and the region, which will be delivered by pipeline to a floating production, storage and offloading (FPSO) ship, above the gas field.

A partnership with Woodside is seen as favouring the floating natural gas solution for Israeli exports, which would diminish the prospects of Israel pooling its gas reserves with Cyprus’ via an onshore LNG plant here. Woodside intends to construct a floating liquefaction plant in order to export gas from the Leviathan field to East Asia.

And Israeli business website Globes reports that more than 10 bids from Turkish and foreign companies have been submitted in the tender by the partners in Leviathan for the purchase of gas from the gas field. The bids are for the purchase of 7-10 billion cubic meters of gas a year.

Amid all these developments, Cyprus appears to be falling behind the curve. It’s understood, for instance, that talks between the government and Noble – geared at signing a final project agreement on an LNG plant – have been stalled for months. So far the proven reserves in Cyprus’ Exclusive Economic Zone are insufficient to warrant the operation of an onshore LNG facility.

Meanwhile in an address to the 3rd Cyprus Energy Symposium in Nicosia, President Nicos Anastasiades said that hydrocarbons in the Eastern Med could become the catalyst for a solution of the Cyprus problem. In his speech, Anastasiades said that energy could and should be a source of cooperation, not conflict.

“A few months ago, I read an article on the discovery of huge quantities of natural gas in the Levantine basin, which stated that God must have a sick sense of humour for endowing this region of the world with all this wealth,” Anastasiades said. “Our intention,” he went on, “is to prove false those who view the godsend of energy as an element of conflict and antagonism. Imagine the same map of the region where the Cyprus-Turkey problems have been resolved. That would completely change the equation. Cyprus can become the transit hub for the region’s natural gas to any destination.

“This can be achieved through bold moves and decisive steps, without prejudices and ideological fixations, the only guide being the national interest. Hydrocarbons can serve as a catalyst for the solution of the Cyprus problem. In the context of a federation, both communities would have rights to the country’s wealth.”

Publicly, Nicosia has ruled out the option of exporting its gas via a pipeline through Turkey unless the island’s political conflict is first resolved.