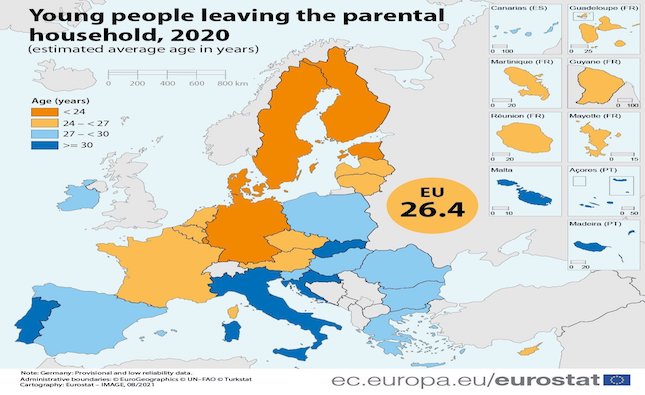 Cyprus is close to the EU average as concerns the age at which young people leave the parental household, a Eurostat survey published on Thursday revealed.

The survey marks “International Youth Day”, an awareness day established by the United Nations in 2000 and observed annually.

Cyprus’ stats reflect almost perfectly the EU average, even after registering a 0.3 year’s decline since 2019. Like in the rest of the EU, Cypriot women leave their homes earlier than men.

Sweden, with 17.5 years, recorded the lowest average age of young people leaving their parental home, with Croatia (32.4 years) recording the highest among the EU countries in 2020.

In most northern and western countries, young people left the parental home on average in their early to mid-twenties, while in southern and eastern countries the average age was in the late twenties or early thirties, it added.

In Croatia, both young men and women moved out the latest in the EU (at the age of 34.0 and 30.9 years, respectively), representing the third widest gender gap of 3.1 years.

Sweden, Luxembourg and Estonia recorded the smallest gender gaps with 0.1, 0.4 and 0.5 years difference respectively between young males and females leaving the parental home.