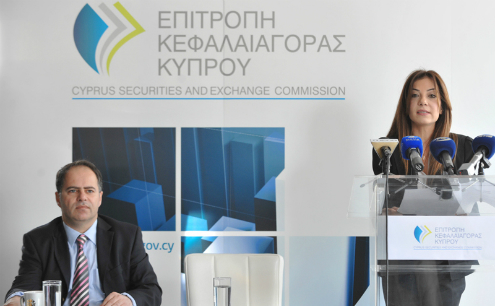 Cysec aims to boost market and its supervision

The Cyprus Security and Exchange Commission (Cysec) aims to further boost the Cypriot capital market and the supervision of the sector, chairwoman Demetra Kalogirou said recently.

At a news conference, Kalogirou said that Cysec has seen companies under its supervision rise almost twofold from 315 in December 2011 to 610 in December 2016, with an additional 134 applications for licensing in the pipeline.

“Cysec’s vision is to consolidate the Cypriot capital market as one of the safest, most credible and most attractive investment destinations,” she told reporters.

“This can be achieved through effective supervision that would safeguard investor protection and healthy market growth.”

According to Kalogirou, the Cypriot capital market is expected to receive a further boost by the promotion of amendments to the legal framework that would enable the introduction of mini managers for Alternative Investment Firms (AIF) where the total assets of the AIF under management fall below the threshold of €100 million.

Moreover, Cysec will promote new “financial technology” (fintech) products, such as crowd-funding for start-ups, and intends to take part in the University of London research programme on “blockchain technology” – a nascent record of bitcoin transactions.

These efforts will further consolidate Cyprus as an international investment hub, she added.

“This way, we will carry out a more focused and more effective supervision,” she added.

Replying to questions, Kalogirou said that, following the introduction of the necessary technology, Cyprus, along with the UK, has been considered as a hub for foreign-exchange (forex) and binary companies, noting that these amount to 130 from its total 214 licensed CIFs.

“Our aim is not to destroy the market, which contributes to the economy in general,” she explained.

“We became a hub, let us utilise this to our benefit – but we should find ways to bring about full compliance with the supervisory framework,” she added, noting that tax revenues from these firms amounted to €58 million in 2015.

Kalogirou pointed out that the most significant future change in the supervisory framework is the second EU Market in Financial Instruments Directive (MifID II) to be implemented in 2018.

“This is the biggest supervisory change to come to the EU capital markets the years to come and the market as we know it will change,” the head of Cysec said.

The regulator will also promote the 4th EU directive on anti-money laundering (AML) which should be transposed into national law by year-end.

Responding to question on the checks concerning Panama papers, Kalogirou said the commission discovered certain violations by 10 Cyprus-registered companies and has asked these firms for their comments on these findings.

“We have discovered such issues and we will proceed with a possible imposition of administrative fines, depending on the answers we receive,” she said.