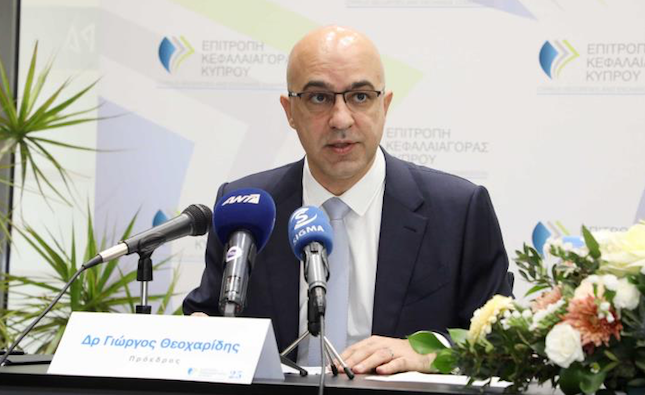 Theocharides said that in 2011, the commission was supervising fewer than 250 entities, while it now supervises approximately 800 entities, a 200% rise.

Sectors and business entities supervised by CySEC include investment funds, a sector which Theocharides described as having a lot of potential for growth, with investment fund assets currently being managed in Cyprus having recently grown to €11.6 billion in total.

In terms of investment firms, there are currently 240 companies, half of which are traditional firms providing services to institutional investors, while the remaining firms offer trading services to private investors.

“This is also a very promising sector, but with risks,” the CySEC chairman said, explaining that the role of the commission is to keep investors safe and informed, adding that they also must study and understand the risks involved before making investments.

Theocharides said that, following the United Kingdom’s exit from the European Union, Cyprus hosts the most digital platforms in the union, with the sector having enjoyed ample growth over the past decade, tracking the increase in know-how and technological developments in the field.

According to data provided by the commission, all investment companies in Cyprus employ around 6,000 people. Furthermore, a significant number of these companies offer additional services, including legal, auditing and compliance services, among others.

“It is, therefore, a sector which, in addition to the revenue it brings to the Cypriot economy, also offers many job positions,” the CySEC chairman said.

Regarding the regulation of digital currencies, such as major cryptocurrencies like Bitcoin, Theocharides said that this falls within the commission’s jurisdiction, as stipulated by the Central Bank of Cyprus’ fifth anti-money laundering directive.

A relevant amendment to the Prevention and Suppression of Money laundering and Terrorist Financing Law finally was passed by the house on February 18, 2021, aligning Cyprus with the corresponding EU directive enacted in 2018.

The commission chairman said that the commission has already issued a missive on the matter and has already received applications from companies who wish to offer investment services related to digital currencies.

CySEC said at the time that its intentions are to foster innovation in the financial technology space while adhering to legislation pertaining to money laundering and illicit funds.

“The digital currency sector will grow significantly in the future and the EU is preparing to issue a directive,” Theocharides said.

“Therefore, the commission must be ready to deal with these platforms,” he added.