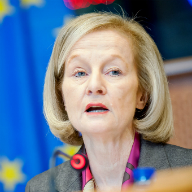 In an interview with the Greek language newspaper ‘Phileleftheros’, Nouy expressed the belief that "the best way for the Cypriot banks to meet any capital needs is through the market."

She also noted that data on the capital needs of Greek and Cypriot banks to emerge from the stress tests will not be available before the second half of October, calling on the citizens "not to give attention to rumours."

Askedwhat the banking union would mean for Cypriot citizens, she said that "first, it will help restore confidence in the banking sector in Cyprus. Secondly, after the completion of the total review it will be possible to consider the gradual relaxation of external restrictive measures. Third, banks will be able to have better access to markets and this will support economic activity as it will allow restoring the flow of credit."