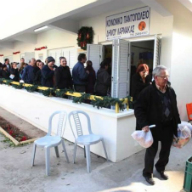 Database needed to support families below the poverty line

More than 13,000 families in Cyprus are living below the poverty line, who are forced to survive with the help of local food kitchens and other volunteer activities according to the Volunteer Commissioner.

Translating to 45,000 people, of those around 13,000 are minors according to the commissioner Yiannis Yiannakis. They are below the poverty line, he added, because for them to be asking for help means they need it. “The numbers levelled out between November of last year and January of this year but recently we have seen an upward trend in numbers,” he said. Yiannakis said that needs are greatest in Nicosia because of the capital’s large population.

“As far as the next months are concerned there is uncertainty because the needs of our fellow man for support are directly related to unemployment, so if unemployment goes up then there will definitely be an increase in those asking for help,” he said. He added “people who don’t have much are even helping, with help coming from some businesses, but we have asked that we target specific groups and are more coordinated”. Yiannakis said that most groups are now trying to enrich their contribution towards those who require help by offering consultation services, psychological services and legal help on a volunteer basis.

“We are trying to create a common format for all volunteer groups so there can be a uniformity amongst them so they can approve those in need on certain criteria and create an online database that the groups can use to see what aid and benefits are handed out,” he said. He said he believed that would help keep a record of what aid is given out and will help make aid more targeted to those who truly need it. The database will help gather statistics on each district, on the people and families who require help.

“The legislation has been sent to the Attorney General’s office to be approved so it can be combined with the registration and certification of volunteer organisations. Efforts are also being made to create a network of volunteer groups which will cooperate and take targeted action,” he said.