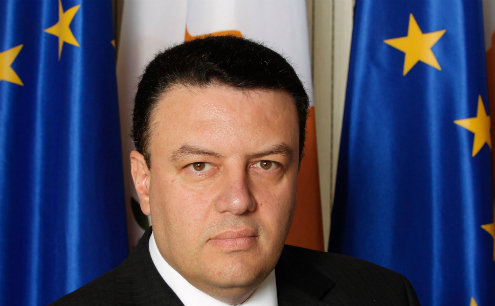 Defence Minister Tasos Mitsopoulos dies, a day after suffering a ruptured cerebral aneurysm. He was 48.

The minister was being treated at Nicosia general hospital’s intensive care unit after the ruptured aneurysm caused extensive haemorrhaging. On the morning of March 22, doctors said his condition had deteriorated and was considered irreversible.

President Nicos Anastasiades, who visited his minister and friend later that morning said, “Only prayers can help at this point”. Despite doctors’ efforts, Mitsopoulos died at 1.30pm. His death was officially announced shortly afterwards. “His family and Cyprus have lost an exceptional man, an exceptional politician,” Health Minister Philippos Patsalis told reporters outside the hospital.

He was married to Katerina Vati and had a son and a daughter. The Council of Ministers met later that evening, where Mitsopoulos’ place was taken by a photograph and a bunch of white flowers. It was decided to declare three days of mourning during which flags in public buildings will fly at half-mast. News of his death prompted a wave of tributes on social media, with ordinary people extolling the late minister’s ethos and integrity.

Mitsopoulos was highly respected across the political spectrum. He was considered a rare breed of politician at a time when public trust in politicians is at an all-time low. “We are losing a friend, a colleague, but mainly we are losing an honest politician, with ethos, who was never seduced by the temptation of power,” Foreign Minister Ioannis Kasoulides said. “A rare phenomenon in the country’s political life.” Main opposition AKEL said Mitsopoulos’ death was a loss for the country’s political life, especially under the current circumstances. “Tasos Mitsopoulos was distinguished for his political and human ethos, his dignity and political moderation,” a party statement said. “He was polite to everyone, always.”

Born in Larnaca on May 30, 1965, Mitsopoulos got involved in politics from early on. He was a member of DISY’s youth and the student organisation Protoporia (1978-2000) as well as a member of the leadership of the Youth of Greece’s New Democracy between 1988-1990. Mitsopoulos served as director of the office of the DISY chief (Anastasiades) (1997-2005) and as spokesman (1999-2008). He was elected MP twice, a post he served for seven years until March last year when he was appointed communications minister. Mitsopoulos assumed the defence portfolio during a reshuffle earlier this month.

DISY chief Averof Neophytou said Cyprus had lost “a wonderful man with a unique ethos. He will be missed. During our time with you even though it was short you taught us alot. You will be forever in our hearts as the man with the wide smile and great courtesy,” a statement released by the ministry of defence said. The House Defence Committee will have a special meeting on Monday morning to honour the minister.

Mitsopoulos was found unconscious in his office by his secretary, at around 10.30am on March 21. He previously had a meeting with the Greek ambassador Vassilis Papaioannou and was scheduled to meet with US ambassador John Koening. When he ran late for the second meeting, his secretary tried to call him on his office and on the mobile. When Mitsopoulos didn’t pick up, she knocked on the door and decided to enter when she got no response. Upon finding the minister unconscious, the secretary called an ambulance and notified a clinic next to the defence ministry. Doctors from the clinic rushed to the office and performed CPR until the ambulance arrived and took the minister to Nicosia General for emergency surgery. Reports said Mitsopoulos had complained about having a bad headache on the previous evening but he only took a couple of over-the-counter pain killers and went to bed. His wife had asked him to cancel Friday’s appointments and visit his doctor but he refused.