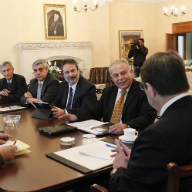 The Association of Laiki Bank depositors meet with President Anastasiades, presenting him with a proposal regarding monetary compensation from future natural gas exploitation.

The depositors in question lost money after the Eurogroup bail-in, which resulted in a massive haircut and the eventual collapse of Laiki Bank. The association now proposes that all losses be recorded and the losers compensated with future profits from the exploitation of natural gas resources. Association head Adonis Papaconstantinou told the press that the proposal was now updated to include the updated memorandum agreed with the troika of lenders, the European Central Bank, International Monetary Fund and European Commission. “We explained our proposal to the president in brief and agreed to meet with finance minister Harris Georgiades who happened to be in the building for another meeting. We scheduled the meeting for the near future,” Papaconstantinou said, adding that the aim of the proposal was the reinstitution of damages caused by the Eurogroup decision.

Compensation wasn’t the only topic of discussion. The association delegation also expressed their dissatisfaction with the memorandum clause regarding the Bank of Cyprus 18% share capital (the former Laiki Bank who merged with BoC), which stipulates that control over it should be given to an international house. “Our position is that since depositors own that 18% we should make any decisions that stem from the ownership of 18% of the Bank of Cyprus. If it is decided that the share capital will be sold, we want to make sure that the sale won’t damage Laiki depositors,” Papconstantinou said. Asked about the president’s reaction to the proposal, Papaconstantinou said he was very receptive. “I have to say that he heard our demands carefully and as I said we have a scheduled meeting with the finance minister to discuss our proposal further,” he added.