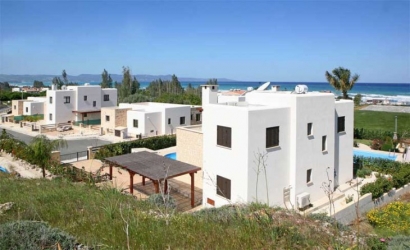 Developers must diversify as property market too dependent on passports

Property sales have dipped over the four months June to September 2019 bringing the boom to a temporary halt after almost 4 years of double-digit growth fuelled by the Cyprus passport scheme.

The drop has fuelled concerned over the industry’s reliance on the investment scheme which has its limits, say experts.

Since the passport criteria became tougher in May 2019, property sales have dropped by 6.6% in the last four months according to Land Registry data.

Limassol and Famagusta seem to be facing the biggest crunch. In Limassol, sales dropped by 19.2% in June to September compared to last year, while sales in Famagusta declined by 25.3%.

A 1.3% decrease was also recorded in Larnaca, while Nicosia and Paphos recorded a sales increase of 5.3% and 7.4% respectively, although much lower than the first five months.

According to the Land Registry’s data, the strong upward trend recorded in the first five months of 2018 has been reversed since June.

The drop, however, is partially attributed to the fact that earlier in the year sales had rocketed as a large number of foreign investors rushed to buy property before changes to the Citizenship for Investment scheme were in effect.

In the first five months, property sales soared by 34.2% year-on-year, while sales declined 6.6% in the next four months, from June to September. Since May, only tens of passports have been issued compared to the hundreds issued earlier.

Economists, however, are sounding the alarm over the construction industry’s dependence on foreign investors eyeing the Cyprus passport, as they claim the industry, as it is currently set up, is not viable and developers will need to look into diversifying their activities.

Veteran real estate agent Antonis Loizou said although it may be early days to draw conclusions, there is a direct link between the tougher criteria introduced for foreign investors eyeing a Cypriot passport.

Sales had hit a record high before May, when the restrictions were introduced, thus making the drop in the following months more pronounced.

Loizou said it is not yet clear how these changes are to affect the way foreign investors will look upon Cyprus property.

“The amount needed for investment has increased significantly from €2 million to €2.5 million, while investors will have to contribute €150,000 to funds set up by the government for innovation and development.”

Loizou added that all these changes have been introduced at a time when Greece is preparing a similar Citizenship for Investment scheme with “investors most likely to take a warmer interest in a country like Greece over Cyprus”.

He noted that Cypriot interest in real estate has been revived, which could help keep the industry ticking.

“With interest rates having hit rock bottom, Cypriots are also eyeing property as a means of investment.”

However, banks are making it tough for Cypriot buyers as they are keeping a tight leash on lending.

“Naturally after the events of the past years, banks have their reasons to be reserved in giving out loans, however, they should be more lenient and help get the ball rolling again.”

Constantinos Savvides, director of PwC's Real Estate Advisory department, prefers to take a step back and wait a few more months before evaluating the full impact of the new criteria introduced for the CIS on the construction industry.

He noted, there is a clear link which should be sounding the alarm that Cyprus’ property market is heavily dependent on the CIS and needs to diversify.

“We should be diversifying our industry, following the emerging trends in the rest of the European Union and investing in specialised real estate properties such as healthcare-related projects.”

These could be properties which could shelter several practices for doctors of various specialities or retirement complexes.

The PWC partner argued that developers should be looking into new ideas such a co-living and co-working facility approaches which are gaining ground in Europe and the rest of the world.

Savvides said that what is missing from the construction industry at the moment is specialisation in various fields like health and innovative sectors.

Fiscal Council president Demetris Georgiades said that although it is not clear what caused the recent drop in sales, it is a clear indication that Cyprus will need to reconsider its passport for investment scheme as currently the industry and the economy is heavily dependent on it.

“The economy may be doing well, we may have good results from tourism, real estate and other measures taken in the public and private sectors, but we are not in a position to swiftly respond in a new crisis as we have our eggs in one or two baskets.”

Wanting to stress how volatile the passport scheme is, Georgiades referred to the one prepared by Greece, which will certainly have an impact.

“It just goes to show that you cannot rest your development on such a scheme. The scheme has an expiration date. Currently, Limassol is running out of land to accommodate the towers.”

Georgiades said the Cyprus Investment Scheme should change but he did not imply that it should be terminated.

“The scheme should target foreign investors who will not just take the passport and go home but will actually bring real business to the island.”

Panos Danos, CEO of Danos / BNPRE Group said one should not jump to conclusions over the magnitude of the sales dip.

“We’ve definitely seen a cooling of the market over the last year in areas such as Limassol, and this has spread to other areas over the last few months, but the naturalization scheme will remain attractive to foreign investors.”

Things will become clearer once Cyprus can finally exploit its natural resources, with a possible solution of the Cyprus problem coming into play, while Brexit is still an unknown factor, said Danos.

Cyprus introduced stricter criteria for granting citizenship to investors, following an international outcry over the naturalization programme’s lack of transparency.

Cyprus adopted the scheme in 2013 as a measure to combat the financial crisis hitting the island, with hundreds of passports issued to investors and their family since.

Finance Minister Harris Georgiades said in February that from 2013 to the end of 2018 the government approved 1,864 applications, involving transactions yielding €6.6 billion.