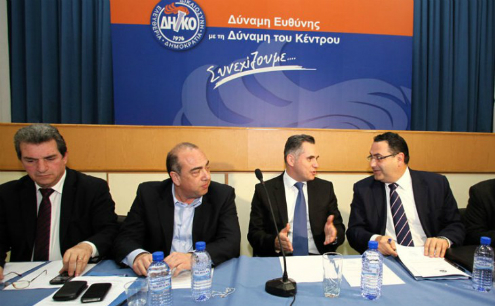 DIKO votes to leave the government coalition over disagreements with the President concerning the terms for the resumption of peace talks.

Its central committee voted by 97 to 81 to uphold the recommendation of the party’s executive office to abandon the coalition due to its disagreement with a joint declaration agreed between Anastasiades and Turkish Cypriot leader Dervis Eroglu. The declaration paved the way for substantive talks to reunify the island. The party’s four cabinet ministers are expected to resign their posts immediately along with the chairmen of three semi-government organisations. The vote came after a recent marathon session.

DIKO members were asked to choose between a proposal by party leader Nicolas Papadopoulos to leave the government, and one tabled by deputy chairman Marcos Kyprianou who suggested asking Anastasiades to try and make the declaration acceptable for the party and leave if he failed to do so. Papadopoulos argued that the party’s pre-election agreement with Anastasiades had been violated and it could not be updated as some members suggested. He said that Anastasiades had ignored the party when they said they would leave and wondered whether the president would listen to them if they decided to stay on.

From day one, Papadopoulos said he had “serious concerns” about the terms of the joint declaration, which he felt included unprecedented concessions to the Turkish Cypriot side, with nothing to show for them by way of reciprocal gains. He also said he considered DIKO’s pre-election deal with Anastasiades “terminated” by the President on the grounds that he failed to consult with his coalition partners before coming to final decisions.

According to Papadopoulos’s interpretation, the agreement dissolved the Republic of Cyprus and implied the ‘virgin birth’ of a new state, conceded separate sovereignty to Turkish Cypriots, reintroduced the concept of dual citizenship, violated Anastasiades’ pre-election pledge that the basis for the resumption of talks must be “clearly defined,” and revived the philosophy pervading the Annan Plan, which was overwhelmingly rejected by Greek Cypriots in 2004.

Observers suggested that the departure was not necessarily bad news for Anastasiades who could now push on with the UN-sponsored talks with the main opposition AKEL’s backing and can still count on DIKO for support in economy-related matters, such as the anticipated passage of the privatisation bill in parliament.