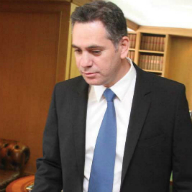 DIKO votes to quit coalition over handling of Cyprus talks

Government coalition party DIKO votes to abandon the ruling alliance, citing disagreement with the terms for the resumption of negotiations on the Cyprus issue and accusing the President of violating his pre-election pledges.

The decision calls for the resignation of DIKO’s four ministers and three heads of semi-governmental organisations by March 4, but the party pledges to maintain a “responsible stance within and outside of Parliament.” The decision will be brought before the party’s Central Committee for final approval. In a statement issued after the marathon eight-hour session, DIKO listed the reasons for its decision and cites the party’s “history, principles and duty to the country’s citizens”, as well as “ethical and political imperatives”, as drivers for its decision to withdraw. “When it comes to issues like the handling of the Cyprus problem, the protection of the Republic of Cyprus, defending the interests of the Cypriot Hellenism and securing the solution we want, there cannot be, and there must not be, compromises. For the Democratic Party, no share of power compares to our values and principles. Once again, we are called upon to defend what’s right, our dignity and our history,” the statement concludes.

Reports suggested that ministers were given until March 4 to resign so that they can collect the bonus they are entitled to when they complete one year in office. That falls on March 1. The reports sparked outrage, with people calling on Anastasiades to reshuffle his cabinet immediately. The press has learned however, that at least one DIKO cabinet member, Energy Minister Giorgos Lakkotrypis, will leave office immediately if he resigns eventually.

DIKO’s Executive Office was convened recently by leader Nicolas Papadopoulos to discuss the latest developments on the Cyprus problem. The session focused on the terms of resuming negotiations as set out in the joint declaration rubberstamped by Anastasiades and Turkish Cypriot leader Dervis Eroglu on February 11 when the talks officially resumed.

Addressing DIKO’s body’s members, Papadopoulos unleashed an all-out attack on Anastasiades and listed the reasons why he considered the agreement for the resumption of talks unacceptable. He then moved that DIKO exit the government coalition and its four ministers tender their resignations. Speeches by members, some supporting the proposal and others voicing dissent, were followed by prolonged discussion, before Papadopoulos’s motion passed with 22 votes in favour, 15 against and 2 abstentions.

Since it was unveiled, DIKO’s leader made no secret of his “serious concerns” over the terms of the agreement, which he felt included unprecedented concessions to the Turkish Cypriot side, with nothing to show for them by way of reciprocal gains. He also said he considered DIKO’s pre-election deal with Anastasiades “terminated” by the President on the grounds that he failed to consult with his coalition partners before coming to final decisions.

According to Papadopoulos’s interpretation, the agreement dissolves the Republic of Cyprus and implies the ‘virgin birth’ of a new state, concedes separate sovereignty to Turkish Cypriots, reintroduces the concept of dual citizenship, violates Anastasiades’s campaign-trail commitment that the basis for the resumption of talks must be “clearly defined”, and revives the philosophy pervading the Annan Plan. “Unfortunately, after this agreement, negotiations are starting  from a very poor base which will  lead with mathematical precision to a very bad solution.,” the party’s statement said.

Earlier, Papadopoulos had met with former DIKO leader Marios Garoyian, who cited political stability, national unity, and party interest as arguments in favour of DIKO remaining in the ruling coalition, but only after Anastasiades committed to his interpretation of the joint communiqué as a benchmark for the resumed talks. Garoyian’s conciliatory suggestion was promptly met with outright rejection by an unbending Papadopoulos. Garoyian also addressed the Executive Office, arguing that DIKO’s role must be close to the President so that it can shape developments. He denied that the pre-election deal he made with Anastasiades had been violated and subtly assigned self-interest to Papadopoulos’s manoeuvring. “I feel that we must all set our personal strategies aside and restrain our personal ambitions”, he said, adding that “they cannot be acceptable when they contradict national priorities.”

DIKO’s withdrawal from the government would raise a multitude of tough questions that Anastasiades would be called to answer, ranging from the way forward on the newly-resumed talks on the Cyprus problem to replacing successful political appointees, and perhaps even passing legislative bills through the House – as DIKO’s pledge of a “responsible stance” seems to only refer to bills relating to the bailout agreement.

Open dissent by DIKO to the President’s strategy on the Cyprus problem leaves opposition party, left-wing AKEL the only significant political power – other than ruling DISY – supporting the resumption of talks on the basis of the agreed text. AKEL’s increased leverage may lead to more assertive politicking, especially on issues of leftist ideological principle, which it has had to swallow thus far. On the other hand, DIKO’s wing of Cyprus problem hawks may have been a threat from within to the President’s strategy, so it may be something of a blessing that this induced crisis hasn’t been allowed to fester any longer. The party’s ultimate withdrawal may raise the stakes enough to shed much-needed light to the picture as all key players are forced to pick sides in some quasi-apocalyptic ‘moment of truth.’