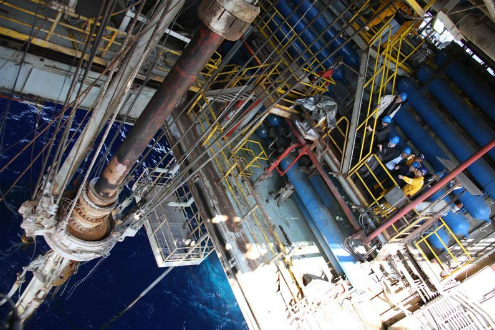 Hydrocarbon reserves in the eastern Mediterranean were the focus of the 2013 Annual Conference of the PRIO Cyprus Center (Peace Research Institute Oslo) that was held in Nicosia.

The conference focused on the geostrategic, economic, and political implications of hydrocarbons development in the eastern Mediterranean. The emphasis was on countries with proven or potential oil and gas reserves, Israel, Cyprus, Lebanon Egypt, and their neighbours, Greece and Turkey, as well as countries with strong strategic interests in the region, such as the United States and Russia. Addressing the conference, German ambassador to Cyprus Gabriela Guellil said the hydrocarbons issue is of utmost importance not only for the region due to the geopolitical and geostrategic implication of natural resources, but also as regards the Cyprus problem and the economy in Cyprus. “All these issues are interlinked”, she noted.

The first panel of the conference focused on the regional perspectives and the mapping out of the geopolitical context in which hydrocarbon development is taking place. It focused on Cyprus, Greece, Turkey, Lebanon and Russia. Additionally, the conference included industry perspectives on how eastern Mediterranean gas reserves fit into the global energy context, potentialgas markets and export options and geopolitical security risks. The conference was co-organised by PRIO Cyprus Center, the Friedrich- Ebert Stiftung Foundation and the Brookings Institution.

Cyprus is currently developing natural resources discovered within its Exclusive Economic Zone, while several international companies are involved in hydrocarbon exploration and exploitation activities. Preliminary results of a Noble Energy appraisal well for natural gas in Block 12 of Cyprus’ EEZ estimate the hydrocarbons reserve between 3.6 trillion cubic feet (tcf) and 6tcf with a gross mean resource of 5tcf. Other speakers at the event noted that these amounts fall short of what is needed for a Liquefied Natural Gas (LNG) terminal, since at least 5.5 tcf to 6 tcf are needed to make the plant’s operation viable.

The difficulty in financing an LNG terminal – anywhere from €6bn to €8bn — was also raised. Economist Alex Apostolides pointed out that debt-ridden Cyprus would be unable to raise that kind of cash anytime before 2025. Speakers also said that energy cooperation between Cyprus and Turkey was unlikely prior to a settlement of the island’s political problem. Israel is considering several options for exporting its own substantial gas finds, including a pipeline to Turkey – which would meander through Cyprus’ EEZ – piping it to Cyprus, or both.