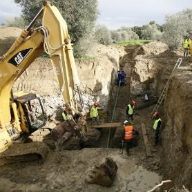 The European Commission in cooperation with the UN Development Program has signed an agreement for an additional financial support of €2,6 million for the Committee on Missing Persons in Cyprus (CMP).

The EC has granted the CMP a total of €12,1m. According to an announcement issued recently by the Commission, the EC points out that the some amount will be used to raise awareness between the two communities on the island. The EC also underlines that CMP reinforces the cooperation between the communities and through the process of exhumation, identification and return of remains to their families. During 2013 a total of 140 individuals were identified and returned to their families. Since 2006 CMP identified the remains of 477 individuals.

Cyprus has been divided since 1974, when Turkey invaded and occupied its northern third. As a result of the invasion, 1,619 Greek Cypriots were listed as missing, most of whom soldiers or reservists, who were captured in the battlefield. A further 41 more cases of Greek Cypriot missing persons concern the period between 1963-1964, when inter-communal fighting broke out but none of them has been identified yet. The number of Turkish Cypriot missing since 1974 and 1963/64 stands at 503.

According to the latest information from the CMP, made available in mid December last year, there are currently 271 burial sites on the excavation list, nine of which allegedly contain more than 20 remains each. The CMP has 200 sets of human remains stored in its laboratory, waiting for identification.