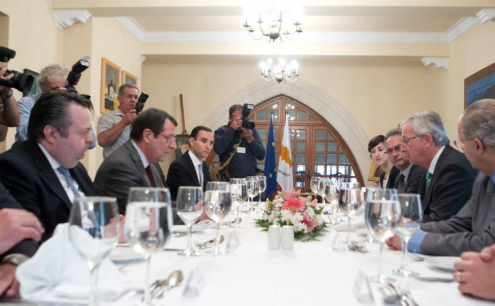 Jean-Claude Juncker, the EPP candidate for the next European Commission president commends Cyprus' efforts to exit the economic crisis.

President Nicos Anastasiades, welcoming Juncker to Nicosia, said the former prime minister of Luxembourg and ex-Eurogroup president maintains a principled stance vis-a-vis the Cyprus problem, regarding it as a European problem.

Speaking before a working lunch at the presidential palace, Anastasiades welcomed Juncker’s support for the on going Cyprus talks and confidence building measures.

Juncker is a well-respected European personality, a good personal friend and a friend of Cyprus, said Anastasiades.

He added that one of his attributes was that Juncker served as prime minister of a small European country, and was thus aware of the problems similar countries faced – that they do not depend on industry, as much as tourism and services.

Juncker said he was happy to be back in Cyprus, adding that he always took a deep interest in everything concerning the country, when he was chairing the Eurogroup.

“I wanted to check here in Nicosia how much progress has been made,” the EPP candidate said and commended the government for the way it is leading the country out of the crisis. He added that the economy has proven to be resilient.

The adjustment programme was working, he said, adding that the government is doing everything in its capacity.