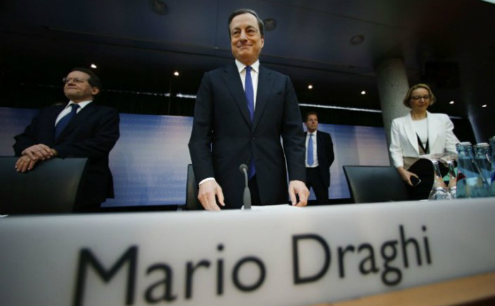 ECB’s programme may buy up to €130m in Cypriot assets

Cyprus could benefit with asset purchases worth up to €120m a month, according to unnamed sources, while the government is set to evaluatein detail the ECB’s decision

The European Central Bank’s purchasing programme may have limitations that water down its effectiveness, two economists said.

“The ECB has taken an important step towards becoming a regular central bank,” Sofronis Clerides who teaches economics at the University of Cyprus said in an emailed interview. “The programme ticks most of the right boxes. It is large, it is open-ended, it allows countries like Cyprus and Greece to participate”.

The economist said that the ECB broke a taboo by introducing for the first time “some risk-pooling”, which is “important”.

ECB chairman Mario Draghi announced yesterday a €1.1 billion asset purchase programme aiming at preventing the euro area from entering a deflation spiral which would further threaten the 19 member currency bloc’s anaemic economic growth. The programme will run from March 2015 to September 2016, or as long as it takes to bring inflation “close but below 2% in the medium-term”. Under the programme the ECB will buy assets worth €60 billion a month.

“It remains to be seen how effective it will actually be in practice,” Clerides said adding that “it has already served a purpose by causing the euro to depreciate,” which was already factored in by markets to a large extent. Clerides said that still two questions remain open.

“One is that the purchases will be based on shares in the ECB’s capital key,” he said. “This means that it is not targeted to the countries that need it most. This is not ideal, but it was probably unavoidable”.

The gap in the government bond yields between the euro area’s core and the periphery exceed 100 basis points while in the case of Cyprus and Greece the gap is four or seven times as much respectively.

“The second question mark regards the risk-sharing arrangement,” Clerides said. “From a symbolic standpoint, it would have been preferable to have more risk-sharing. It can be argued that Europe does not have a single monetary policy. Draghi tried to dismiss this, but he was not so convincing”.

The capital key reflects the contribution of member states to the ECB’s capital, including those that have not joined the euro, and is calculated based on the size of each country’s economy and population. While Cyprus’s capital key is 0.1513% of the ECB’s capital exceeding €10.8 trillion, its share in the purchase programme appears to be around 0.21%, which is the share of its capital contribution compared to the total contribution of all other euro area members, which exceeds €7.6 trillion. As a result purchases of Cypriot assets will likely be below €130 million each month.

CyBC reported today without citing its source that Cyprus could benefit with asset purchases worth up to €120 million a month. The finance ministry declined to comment while officials from the Central Bank of Cyprus were unavailable for a comment. Government spokesman Nikos Christodoulides said yesterday in an interview to state television that the government will evaluate in detail the ECB’s decision.

“The extent to which this programme succeeds in stimulating growth in the European Union however, depends on the extent to which it will ultimately put money in the hands of small and medium size enterprises, which are by far the bulk of businesses in Europe,” economist Ioannis Tirkides who heads the Bank of Cyprus economic research said.

“In this regard there are limitations,” Tirkides said and cited Europe’s small market for asset backed securities in comparison to that in the United States which subsequently results in purchases of government bonds.

“Putting money in the hands of small and medium size enterprises therefore goes through the banks and would thus depend on demand but also on the willingness of banks to lend,” he said. “Results therefore can be limited”.

Bailed out countries such as Cyprus and Greecemust successfully complete their evaluation by international creditors to become eligible for the ECB programme, Draghi said yesterday. Cyprus’s evaluation was suspended following the December 18, parliament vote which postponed the enactment of a law which was part of the country’s March 2013 bailout agreement.

The programme which is also known as quantitative easing and will run with the national central banks purchasing respective assets is unpopular among Germany’s policy makers and public on fears the country’s taxpayers may have to shoulder losses resulting from reckless government spending in other countries as the ECB will shoulder one fifth of potential losses.

“The bond purchase may have received the legal blessing of the European Court,” a commentator Holger Steltzner wrote in Germany’s Frankfurter Allgemeine Zeitung arguing also that it will further put pressure on interest rates which will have a detrimental effect on saving and pensions. “From an economic point of view, it remains a government financing”. “The ECB’s giant purchase programme will speed up devaluating competition; the euro will become weaker”.

By taking this decision, the commentator continued, the ECB buried the principles of the monetary union. “This is the worst thing. This is how the ECB destroyed faith in the euro”.

Economist Tirkides said that while limited risk sharing is not promoting European integration, debt mutualisation continues to be politically impossible. “Each country bears responsibility for its own debt and the focus should remain on structural reform,” without which the euro area will not get out of its problems sustainably, he said.