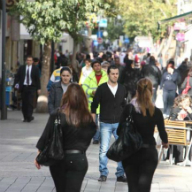 The economic sentiment indicator in Cyprus improved for the ninth consecutive month, according to recent data released by the European Commission.

The Commission’s paper notes the fact that among the countries under economic adjustment programme, in Cyprus the indicator reached its highest level since July 2011. In Cyprus, the indicator rose from 90.3 points in December 2013 to 91.3 in January 2014, the highest since July 2011, when a munitions blast at a naval base killed 13 people and incapacitated the island’s biggest power station. The indicator has been improving continuously since April last year when the EU agreed to bail Cyprus out but imposed harsh terms on its banking system.

As regards the services sector, it rose by 7.7 points in one month, while improvement was seen in other indicators apart from consumer confidence which recorded a decrease. In particular, Cyprus showed improvement in industry (up by 1.5 points), retail trade (+1.4), construction (+3,1), services  (+7,7), while consumer confidence index dropped by 2.8 points.