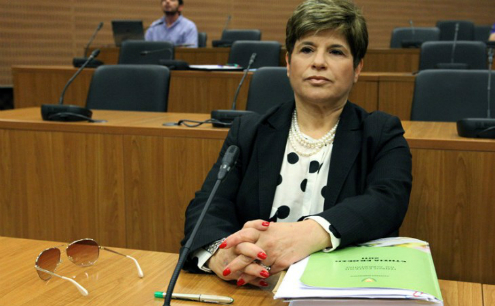 The economy will win back its credibility, says the CB governor-designate, before officially becoming the first female top banker in the eurozone.

“I am convinced that we can and will succeed in regaining the credibility of the banking sector and our economy,” Georghadji said after a two-hour meeting with outgoing governor Panicos Demetriades who resigned recently. This was the first of daily meetings the new governor will be having so that she will be fully briefed on all the matters by April 11, when she officially takes over.

“This is not a job for one person, it is everyone’s job,” Georghadji said. “This institution deserves to acquire the prestige and trust it had all these years.” She added that she considered the support of the staff and the CBC board a given. “Any bitterness created for any reasons must belong to the past. The bank must and can remain as the most credible institution in the country,” she said. Asked about the fact that she will be the only woman on the European Central Bank’s Governing Council, Georghadji said it did not change a thing. “The ECB will simply be enriched by a feminine aspect,” she said.

Demetriades’ abrupt resignation, two years into a five-year term, prompted speculation that a trade-off had taken place. The announcement shortly afterwards that the state would not pursue a case against him over his dealings with a consultancy firm only helped to intensify the criticism.President Nicos Anastasiades and Attorney-general Costas Clerides rejected the suggestions, but to no avail. Clerides reiterated that the decision to drop the case was based purely on legal grounds.

The central bank’s board of directors had accused Demetriades of keeping them in the dark on major issues including a clause in Alvarez & Marsal’s contract allowing it to claim a percentage of money required for the bailout of Cypriot banks. That contract, and allegations it was backdated, were under investigation by the attorney-general. Clerides said ordinary people’s suspicions and the lack of trust in the institutions were so high that it was difficult for them to consider it inconceivable for an independent official like the attorney-general to be able to exercise their duty without interventions or expediencies.

He reiterated that after weighing the evidence, he decided it was too risky to try and prove the specific case in court. “It has been said that every case brought before a court has its dangers. Certainly, this is right,” the attorney-general added. “It is, however, a special case of a very serious nature and the overriding factor is the public interest, and it must be taken into consideration seriously.” Clerides said it was not just a simple case of forgery, as some media outlets had presented it to be, which could be proven by a graphologist. He said there were two signed contracts with the difference being that one was post-dated. What had to be determined was whether there had been intent to defraud, Clerides said. He repeated that he weighed all the pros and cons and decided not to pursue the case. “It was my decision and I am assuming full responsibility,” he added. Clerides emphasised, however, that the decision only concerned the specific case and not potential offenses related with the continuing investigation into the collapse of the banking system. “I am not saying there is evidence for those cases. What I am saying is that the whole spectrum of that period is under investigation… and this decision regarding the specific accusation has nothing to do with the other matters, which are still open.”