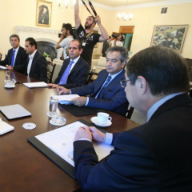 Economy probe to be accelerated

President Nicos Anastasiades recently reiterated the government’s determination to fully investigate the causes of the economic crash as steps were announced to that end.

“Towards this end, he reiterated the government’s readiness to afford any financial or other assistance in a bid to speed up the process,” government spokesman Nicos Christodoulides said.

The spokesman was speaking after a meeting on Thursday morning to review the course of the probe into the causes of the collapse of the economy.

To that end, there will be renewal and strengthening of the team of experts helping the investigators, approval of the funds to procure special software to be used for storing and cross-referencing information from thousands of documents, the spokesman said.

It was also decided to appoint a liaison officer between the police investigators and the legal services in a bid to bring cases before justice as soon as possible.

Cases at an advanced stage will be given priority, the spokesman said.

“With full respect to the state’s institutions, the president reiterated the government’s determination to carry out a full and in-depth investigation of every illegal act that led thousands of our fellow citizens to pay immense financial cost as a result of the mismanagement of the banking sector by those who were responsible,” Christodoulides said.

The meeting was chaired Anastasiades, and attended by members of the House Ethics Committee, the Attorney General, and the deputy chief of police among others.

The government had said the meeting did not aim at interfering with the work of the Attorney General but was part of the president’s zero-tolerance approach to uncovering those responsible.

There has been criticism over the speed of the investigation into the collapse, which saw one bank close and another recapitalised by seizing clients’ deposits.

The scope of the police inquiry covers the expansion into Greece, bank corporate governance, the acquisition of Greek bonds, and how now-defunct Laiki Bank came to amass some €9b in emergency liquidity, a liability since passed onto the Bank of Cyprus.

Cypriot banks lost about €4.5b when European Union leaders agreed in late 2011 to a Greek debt write-down, designed to make that country’s debt burden more sustainable.