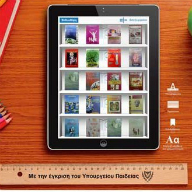 The Aristotelis project, a ministry-endorsed initiative by a private publishing firm to create electronic versions of schoolbooks as study aids, will now be offered free-of-charge, it was announced recently.

The decision was made after private funding was found to cover the costs so that those wishing to use the library would not be charged. Initially the interactive e-books that can be viewed on tablets were made available for sale to pupils for €20 and €10 for educators. “The students who visit the website (www.aristotelislibrary.com) can request an access code so they can safely access the page,” a statement from Square Lab, the publishing firm said. Books from Greece’s Education Ministry will be uploaded before the end of this year so the library can operate for primary school pupils.

For the new academic year a number of software updates have been scheduled to develop new activity tools to aid learning. The project had been the subject of a heated face-off between Education Minister Kyriacos Kenevezos and AKEL MP Irini Charalambidou, after she accused the minister of treating the private publisher favourably. Earlier in February 2014, an auditor-general report appeared to confirm what the MP was saying. According to the report, despite the open invitation to all companies and individuals, only Square Lab was approved to develop and profit from a product, using state resources. The auditor said the product had not undergone a final check, and the company had not secured the right to reproduce certain books from Greece, which were copyright protected. The company reacted by describing the report as being filled with inaccuracies, adding that it was looking into the possibility of suing the auditor-general for slander.