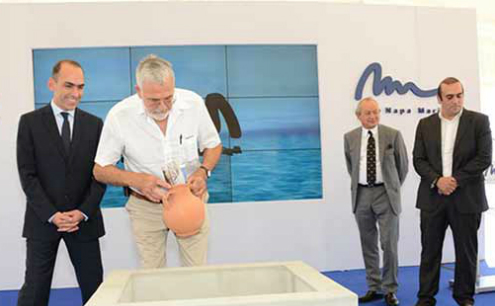 Egyptian billionaire investor Naguib Sawiris said he plans to invest further in Cyprus following a marina project amid a positive outlook for the country’s economy that will be further boosted by future earnings from natural gas discoveries.

“The prospects for Cyprus’ economy are very good with three to four major investments being made every year in the country,” Sawiris said in a September 30 interview in the Cypriot resort of Ayia Napa where he was attending the inauguration of a project to build a luxury marina. These investments include new hotels, a petroleum products storage terminal and a concession agreement for the country’s largest port while an integrated casino resort is planned.

Sawiris and Cypriot partner Gerasimos Caramondanis are investing €220 million ($224.6 million) in a mixed-use luxury residential and commercial marina with berthing space for 600 vessels of as much as 60 meters long. “We found there is a gap in the market for high-end tourists and our aim is for owners of yachts that cost as much as $50 million to come to us,” Sawiris said. The marina is due for completion in 2021.

Sawiris was attracted to Cyprus after the nation came close to shattering the euro area in March 2013, when a haircut on deposits was imposed. “The right time to invest is always when things are bad, when it seems there’s no hope,” Sawiris said.”At such times, governments are open to making concessions and give better deals.”

Cyprus exited its €10 billion bailout program in March after using just €7.3 billion of the total. The country returned to economic growth last year following three years of recession. The country has proven natural gas resources of about 4 trillion cubic feet in the Aphrodite field, discovered in 2011.

“I intend to make further investments in Cyprus, and will look for other opportunities, but first need to see how the marina project will progress,” Sawiris said.