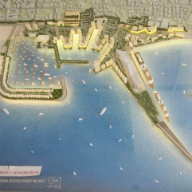 An Egyptian company has expressed an interest in obtaining a stake in developing the Larnaca marina, a move that could breathe new life into the stalled project.

A delegation of the Egyptian concern was in Nicosia last week where they met with the President to discuss their pitch. It’s understood the meeting was a follow-up to a first contact made during the President’s visit to Cairo back in December. Various officials contacted were reluctant to comment, evidently wary of frightening off the Egyptian businessmen, who want to proceed cautiously and have requested confidentiality. The sources were keen to avoid a repeat of leaks that recently scuppered a potential deal for the sale of Cyprus Airways’ time slot at Heathrow Airport to Qatar Airways. But they did say that the Egyptian proposal appeared to be ‘serious’. Insiders learned also that the Egyptians have been in talks with the Zenon consortium, to which the contract for the Larnaca marina and port was awarded.

Following two years of negotiations, the government signed an agreement with Zenon in 2012 for the development of the Larnaca port and marina worth a reported €700m. But local banks, set to bankroll the project, pulled back amid the financial crisis of 2013. As a result the Zenon consortium – consisting of the Paraskevaides Group, Iacovou Bros, Petrolina and Vouros – began seeking financing elsewhere for the marina component of the project. Under the MoU concluded with the government, Zenon was to commence construction works by late September. At the time the consortium succeeded in obtaining yet another extension.

The deadline now – it appears the government will grant no further extensions – is March 31. Should negotiations between Zenon and the Egyptians go well, they would enter into a separate agreement among themselves. The project was to begin with an initial enlargement of the marina to provide facilities to accommodate cruise passengers. The master plan aimed to minimize the initial investment by keeping most of the existing facilities and to optimize the cruise operation by building an offshore jetty and a cruise terminal building. Under the Build, Operate & Transfer (BOT) method, development of the port includes the extension, modernisation and operation for 35 years of the existing port with two major components. The first is a cruise harbour with a new cruise terminal and an offshore mooring jetty and the second is a commercial port to accommodate local traffic.

The marina development would include the extension of the present marina to house 500 berths, later catering for 700 berths and then 900 berths. The project would be executed over a three-phase development spanning nine years in total. The Larnaca marina commercial and leisure development will cover 10,000 square metres. Assuming a deal is clinched with the Egyptians, the latter would presumably be involved in running the marina and have a stake in the land development around the marina area.