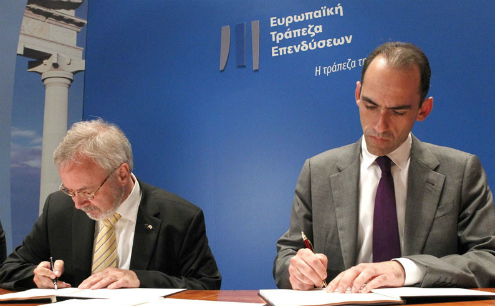 The Cyprus government and the European Investment Bank have signed a loan agreement for €100 million to be used for various projects.

The loan will be used to part-finance investments totalling €1.2 billion in areas identified under the National Strategic Reference Framework for the 2007-2013 period, which include improving the competitiveness of the Cypriot economy, promoting sustainable development, and investing in skills and innovation.

This new loan complements a first loan of €200 million provided in 2012 for the same purpose. “It comes as a timely boost to the Cypriot economy and enhances the effective use of the EU grant funds allocated to the country,” said EIB President Werner Hoyer said. “We are joining forces with the European Commission in supporting the priority areas of sustainable development and human capital and building upon the excellent working relationship with the Cypriot authorities.” This second loan brings total EIB support for key investments in Cyprus to €300 million.

Finance Minister Haris Georgiades said Cyprus was committed to implementing the necessary reforms but it was important that a helping hand had been extended at a time when it was needed. EIB finance focuses on solid waste management, renewable energy, skills and innovation and urban development.

EIB Vice President Mihai Tanasescu said that at a meeting with Cypriot Energy Minister  George Lakkotrypis he had asked the EIB to provide advice on how the construction of natural gas liquefaction terminal could be financed. “Our answer was a very clear positive answer, we can deliver, we can provide some financing advice to them to see this important project for Cyprus could be implemented”, he added.

Asked whether the EIB was interested in investing in the LNG terminal the construction of which has been decided by the Cypriot government, Hoyer did not rule out the possibility of financing the project. “On the other hand we know that the most ambitious plans for the exploitation of the gas fields that might be available will take a little bit more time and so a transition period will probably be needed and for the long run an LNG terminal”, he added.

Hoyer said that the EIB couldconduct the necessary economic analysis from a banking point of view. He noted that “the EIB had a rather unique ability to combine the loan activity of a bank with the blending activity of EU resources, EU funds and the advisory capacity of the banks. We can provide the necessary engineering advice that the authorities might need if they want to we stand ready."