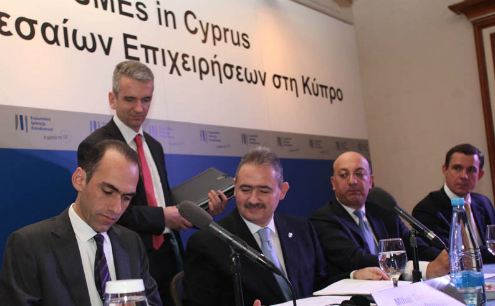 The European Investment Bank (EIB) is putting in place two innovative instruments worth €150 million in support of SMEs in Cyprus.

“The entrepreneurship scheme will provide additional support to small-to-medium sized businesses (SMEs) in Cyprus, as the deep recession in Cyprus is heavily constraining the liquidity of SME businesses and the availability of medium and long-term funding to sustain their activities,”said EIB Vice-President Mihai Tanasescu. The agreements were signed recently in Nicosia by Finance Minister Harris Georgiades and Tanasescu.

The EIB official said borrowing costs for Cypriot SMEs was at significantly higher levels than the EUaverage and that through its funding the lender “tries to address such market weaknesses in a flexible manner. Our presence here today underlines our commitment to, as well as our trust in, Cyprus.”

The first scheme concerns a €50 million facility geared towards supporting foreign trade activities of Cypriot SMEs and mid-caps. Under this instrument, the EIB offers guarantees to foreign banks providing trade finance to Cypriot companies. By mitigating the risks involved in trade financing, the facility should contribute to re-ignite trade flows with Cyprus, favouring an export-led recovery promoted in particular by SMEs and mid-caps. The EIB guarantees provided to foreign banks under the facility will cover risks related to letters of credit and other trade finance instruments issued by Cypriot banks. “This will both alleviate cash collateral constraints otherwise imposed on most SMEs and increase access to international trade instruments at a time when trade has a significant role to play in economic development,” the EIB said.

The EIB will also be granting Cyprus a €100 million loan that will be used to establish a fund mechanism under which the state and commercial banks operating on the island will lend to Cypriot SMEs on a risk-sharing basis. Once operational, this product will develop support for the investment and working capital needs of Cypriot SMEs. The day-to-day management of the scheme, is expected to be entrusted to the European Investment Fund (EIF) – the financing arm of the EIB Group specialising in SME risk-taking products.