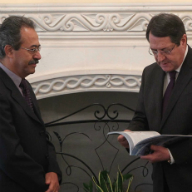 The year 2013 saw a significant reduction in the price of electricity according to the Cyprus Energy Regulatory Authority (CERA) chief, with the average cost falling by 17.5% for regular consumers.

CEFA chief Shammas met recently with President Nicos Anastasiades to hand over CERA’s annual report for 2012. “We discussed the purchase of electricity, natural gas and renewable energy sources,” Shammas said following the meeting. He added that the President showed interest in the matters that CERA deals with and expressed his support for the regulator’s efforts to meet its goals. “The annual report dealt with the subject of the energy crisis, something which CERA has been dealing with for almost two years now,” he said.

Shammas said the results of the regulator’s efforts were beginning to show now that the Vassilikos power station had returned to full working order. The plant was almost destroyed in the Mari naval base blast in July 2011. “There was a significant reduction in the price of electricity in 2013, part of it is to do with CERA’s actions and another to do with the reduction in the price of fuel,” he said. The price reduction comes to 17.5% for the average consumer, although it could be more for others, Shammas added. Asked whether there could be more reductions in the price of electricity in 2014, CERA’s chief said if something like that were to happen, it would be announced and then immediately implemented.

“CERA is currently understaffed and over the last three years we have had an approved budget to fill positions which are necessary for us to perform our duties,” he said. Shammas added that the President expressed his support in the matter and that it is currently being monitored by the troika so a solution could be found. There is currently a freeze on public sector hirings.

“New issues arose in 2013 concerning plans to implement net metering for renewable energy sources for households, and self-production systems for commercial and industrial consumer,” Shammas said adding that these issues were discussed with the President, who supports CERA’s efforts.