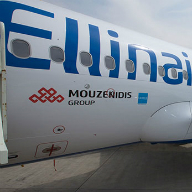 Greek airline Ellinair has launched its Larnaca-Thessaloniki flight schedule with ticket prices as low as €19, it was announced recently.

The Thessaloniki-based air carrier, which was founded in 2013 and operated the first flights to and from the island just this month, announced that flights from Larnaca willbe carried out mainly by its new Airbus 319.

Ellinair has two flights per week to Thessaloniki from Larnaca, but expects to increase these to five a week at the end of May, “offering multiple choices both for holiday escapes and business trips”. Tickets begin from €19 and include luggage, the company said.

Ellinair’s commercial director, Stavros Daliakas, said that the air carrier places great importance on safety and quality and is seeking to forge a trusting relationship with the Cypriot public.

“The positive response to our new route, as already reflected in the occupancy of our new flights, makes us feel optimistic that we are beginning to earn this trust,” he said.

The company’s chairman Ioannis Mouzenidis said that the Larnaca-Thessaloniki route “is only the first step”.

Ellinair’s presence in Cyprus, he said, is an important investment move for the company and marks the emergence of Cyprus “as a destination of strategic importance, not only for Ellinair but for the Mouzenidis Group as well”.

The company is a member of Mouzenidis Group, which has specialised in travel services for more than 20 years. Its flight programme includes 40 destinations in 13 countries.