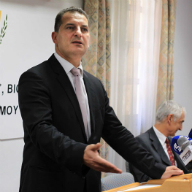 An ‘emergency’ meeting was convened recently in Nicosia to discuss the roll-out of a planned second tender for interim gas supplies.

The gathering was called by energy minister Giorgos Lakkotrypis, who summoned officials from all the involved parties – the Natural Gas Public Company, the Electricity Authority of Cyprus, the energy regulator and the Transmission Systems Operator. Sources said the minister’s intention was to speed up the process so that a new tender could be announced as soon as possible. According to the latest information, the new tender will be for seven years (2016 to 2022), with an option for up to three one-year extensions – potentially 10 years in total. The quantities of natural gas will range from 0.6 billion cubic meters per annum (bcma) to 0.9 bcma. The imported gas – cheaper than heavy fuel oil – will be used to power the electricity grid.

The government had wanted the Natural Gas Public Company (DEFA) to finish the tender documents by this week; but concerns raised by the electricity authority – the eventual buyer of the gas from DEFA – temporarily put the move on ice. The intention now is for the tender to be prepped by the first week of January so that it can then be sent for publication in the Official Journal of the European Union. It’s understood that the document inviting expressions of interest has been drafted, but the annexes – including the Gas Sales Agreement, a key component – are not yet ready.

If and when atender is decided and the competition results in the award of a contract, DEFA will conclude a deal with the supplier, and will sell the fuel to the EAC. Any contract thus requires back-to-back agreements – one between DEFA and the supplier, the other between DEFA and the EAC – that are in sync with each other. The EAC, in the main, has pointed to a number of issues that need sorting out so as to render ironclad a possible contract for the purchase of natural gas. Their worries relate chiefly to whether DEFA will retain its exclusive status as the sole lawful importer and distributor of gas on the island. If that doesn’t happen, and other importers are allowed to market gas here, the EAC might be left with more gas on its hands than it actually can burn in the midst of the contract period. Sources explained that Cyprus already qualifies and is classed as an emergent market according to EU directives – granting the island a derogation to operate as a protected market when it comes to natural gas.

But, they said, Cyprus needs to ‘activate’ this emergent status, which however is a matter of routine: the government would announce its decision via the Cabinet, and then the tender documents put out by DEFA would make explicit mention of the fact that Cyprus is an emergent market.Meanwhile the EAC insists that any contract must contain a price renegotiation clause for the gas after a period of three years. Another concern relates to the possibility of an electricity link between Cyprus and Israel, which would decrease domestic demand for natural gas. The feasibility as well as the timing of such a project is unclear. In short, the EAC wants the government to clarify its energy policy.

The first tender, launched in September 2012, was terminated in October this year after DEFA failed to reach agreement with any of the bidders.