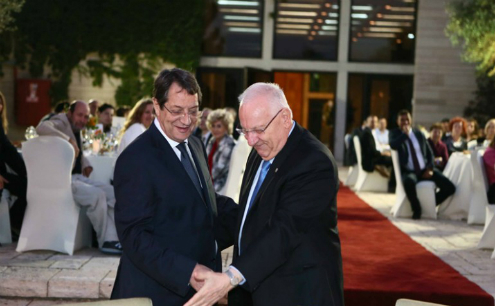 President Nicos Anastasaides’ visit to Jerusalem was hailed by both countries as another step in growing ties between Cyprus and Israel.

After his meeting with his Israeli Prime Minister Benjamin Netanyahu, Anastasiades said Cyprus-Israel relations were deep rooted and collaboration extended to all areas of public policy: political, economic, energy, health, security and many others.

“My aim here is to reaffirm our commitment to the dynamic Cyprus-Israeli friendship and explore ways to practically develop it further,” he said. He also issued an invitation to Netanyahu to visit Cyprus, which was accepted.

Netanyahu also spoke of the common roots between Cyprus and Israel. “We are very close, we are close friends, and in many ways this friendship is so natural between the two democracies in the Eastern Mediterranean,” he said.

Netanyahu also said the two men had discussed “real threats” in the region. “We have a common stake in battling terrorism,” he said. “I appreciate Cyprus’ position as a friend of Israel as a fair-minded country a country that understands that it is in the interest of all democracies to serve the democratic values and stand together with each other.”

On Monday night during a dinner in his honour, hosted by Israeli President Reuven Rivlin, with whom he had met privately earlier in the day, Anastasiades said relations were at their highest point, “not due to necessity or because of economic or political necessity like in the past, but due to free will and choice”.

“As our economic and business ties develop further, our political will to nurture and cultivate further our bilateral relations grows stronger,” he said.

“The Mediterranean Sea, which has connected our two countries over the centuries, with the discovery of hydrocarbon reserves now holds the potential to bring us together also in the field of energy cooperation.” He also hoped for peace in both Israel and Cyprus.

In his address Rivlin said he hoped the visit would take the relationship between Cyprus and Israel “from being dear neighbours and friends, to feeling, truly, like close family”.
During the day, Anastasiades also met with the leader of the Israeli opposition Yitzhak Herzog, and in the morning with the Patriarch of Jerusalem Theophilos III.

Anastasiades was accompanied on his trip by his wife, the foreign and energy ministers, and the government spokesman. The Cypriot delegation returns on Tuesday 16 June.