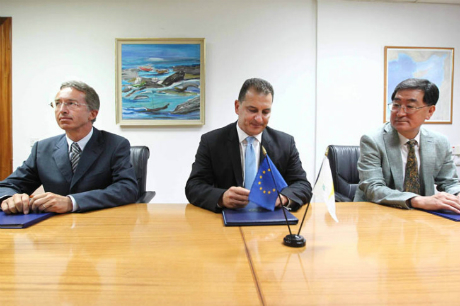 Energy Minister Yiorgos Lakkotrypis said that Cyprus received three bids for block 10 in its EEZ, from a consortium consisting of ExxonMobil and Qatar Petroleum, ENI and Total, and from Norway’s Statoil.

The ENI-Total consortium was also the only bidder for block 6, Lakkotrypis told reporters after briefing the cabinet on the outcome of Cyprus’ third oil and gas licencing round, adding that the government received two more offers from a consortium consisting of Israel’s Delek, Avner and Capricorn, and a second one from ENI.

“The government is very satisfied with the outcome,” Lakkotrypis said. “We have achieved the qualitative targets that we set to attract companies, which have the necessary technical and financial calibre to help us, especially during this difficult financial situation this sector is currently experiencing.”

Lakkotrypis added that on Monday he had asked the chairman of a special advisory committee to start evaluating the bids so that he can submit a proposal to the cabinet.

The minister said the evaluation criteria, which to 65% take into account financial parameters, with the remaining 35% concerning technical aspects, reward companies that pledge to drill exploratory wells within the first three years after signing the contracts. The minister declined to comment on the content of the bids received, including possible signature bonuses.

Block 10, which is adjacent to Egypt’s exclusive economic zone and close to the 30 trillion cubic feet Zohr finding, announced by ENI in September last year, was relinquished by Total months earlier after it decided to concentrate its efforts on Block 11. ENI, together with South Korea’s KoGas, has the exploration and exploitation licence for blocks 2, 3 and 9 in Cyprus’ exclusive economic zone. Delek together with the Houston-based Noble Energy and British Gas, a subsidiary of the British and Dutch energy giant Shell, also partner in the Aphrodite field in block 12, so far Cyprus’ single gas discovery containing 4.5 trillion cubic feet.

Lakkotrypis said that with the third oil and gas round, which the government announced in March, Cyprus’ sovereignty rights, disputed by Turkey, were strengthened. “Our strategy as a whole, with the entry of Shell (via British Gas) and with some of the terms that we modified in this competition, it was to attract companies which would help us technically and financially but also in terms of the political dimension,” he said. Still, the bids “will be judged by their technical and financial (value) according to the criteria we have set”.

Deputy government spokesman Victor Papadopoulos said that the interest shown in the third round “means a lot in every aspect” and added that “everyone can come to their own conclusions”.

While production at Aphrodite is not expected to begin before 2020, and stakeholders are considering various options, including transporting gas to one of Egypt’s mothballed liquefaction plants, Lakkotrypis said that for the government the possibility of setting up a similar facility in Cyprus remains on the table and could be implemented once “necessary quantities” are discovered.

“All options are on the table,” the energy minister said. “The first factor is what discoveries we are going to have, which will be confirmed in the immediate future”.

Currently, consultations with Egypt concerning the sale of Cypriot gas “are quite intensive,” Lakkotrypis said, adding that consultations regarding the development of Aphrodite were also rigorous. “They are both related to each other,” he said. “We would like to conclude as early as possible, there are timetables, but allow me not to say more about this”.