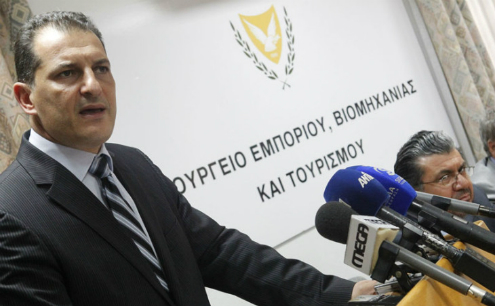 Energy Minister George Lakkotrypis resigns as a member of DIKO, in disagreement with the party’s recent decision to leave the government coalition.

DIKO abandoned the government over disagreements with President Nicos Anastasiades’ handling of the Cyprus problem. In a written statement, Lakkotrypis said he strongly opposed the party’s decision. “DIKO’s history requires it to be in the front line of developments,” Lakkotrypis said, referring to the ongoing effort to reunify the island and the economic difficulties the Republic was faced with.

He said he had sent a resignation letter to DIKO chairman Nicolas Papadopoulos. Lakkotrypis asked for the DIKO supporters’ understanding, adding that his decision was “the only option dictated by my conscience.” Party spokeswoman Christiana Erotokritou said the decision was respected as were Lakkotrypis’ personal ambitions and plans. Erotokritou said DIKO was the thousands of members and voters who have been defending its principles and positions since 1976 and not the state officials. Chairman Papadopoulos had asked the four ministers belonging to his party to resign immediately. All 11 ministers put their resignations at the disposal of the president ahead of an expected reshuffle but Anastasiades asked them to remain in place until March 15.