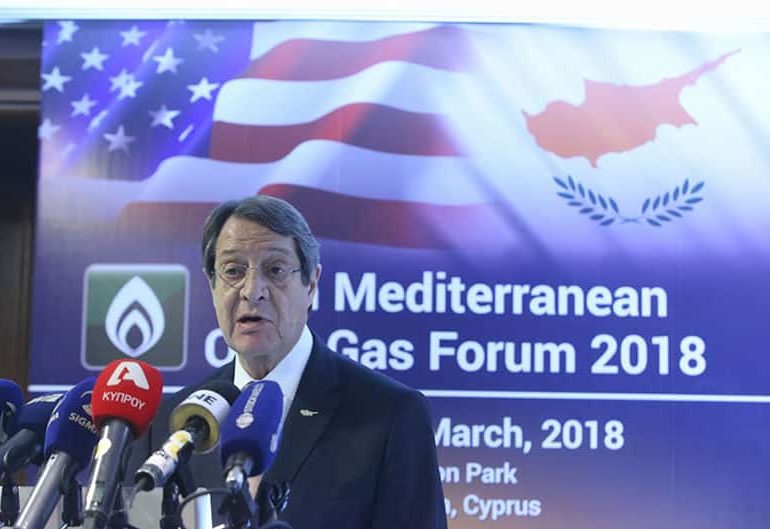 Cyprus is promoting three projects that were selected by the European Commission as projects of common interest, because of their benefits to the European energy market, President Nicos Anastasia's said recently.

The president was addressing the 9th Mediterranean Forum on Oil and Gas in Nicosia, telling delegates that recently, two of the projects had secured EU funding. Specifically, €101 million will be allocated to the CyprusGas2EU project, while the EastMed Pipeline had been awarded €34.5m for technical studies.

The CyprusGas2EU project aims at allowing the transport of gas from the Eastern Mediterranean to Europe. By 2020, Cyprus will construct a Floating Storage and Regasification Unit (FSRU) in order to import gas in the form of LNG from international markets, Anastasiades said. The EastMed Pipeline aims to transport gas from Cyprus and the Eastern Mediterranean to Europe via Crete and mainland Greece.

A third project, the EuroAsia Interconnector, is an electricity connection between Israel, Cyprus and Greece that is supported by all three governments.

“We intend to continue exercising Cyprus’ rights as an independent and fully integrated Member State of the European Union, proceeding with our exploration programme as planned,” said Anastasiades.

He said this was also part of a broader policy in that the discoveries of significant quantities of natural gas in the Eastern Mediterranean, as well as potential future discoveries, could be a driver for stabilization in the region.

“After all, together with the respect by all parties of international law and national sovereign rights, this is the kind of stable and predictable environment that we are obliged to jointly create, in order to bring in the multibillion investments needed for developing the East Med’s hydrocarbons wealth,” he said.

The president said Cyprus’ policy has traditionally been based on regional cooperation and the establishment of long-lasting relationships with all neighbouring countries.

“As we have always maintained, collaboration and synergies achieved in the hydrocarbons sector of the Eastern Mediterranean can feed into the political relations between countries, building the foundations for regional stability and peace,” he said.

Initiatives undertaken by Cyprus had been “highly successful” at the bilateral and multilateral levels, with countries such as Lebanon, Israel, Egypt, Jordan and Greece.

At the same time, he added, the recent deal struck between Israel and Egypt was concrete proof that collaborations between countries in the region were already taking place, “and Cyprus, I can assure you, will be an active participant in future developments”.

The developments were aligned with the EU’s recent Energy Union strategy, which has confirmed the Mediterranean as a strategic priority for reducing EU’s dependency on existing energy suppliers and routes, Anastasiades said.

“Our aim remains to support the EU in its diversification efforts, with Cyprus, as an EU member state, having a stable legal and political environment and constituting a reliable partner for both neighbouring countries and oil and gas companies.” It was also necessary to lift the island’s energy isolation, he said.

Next on the agenda would be the drilling activities of the ExxonMobil/Qatar Petroleum consortium in block 10, which included two back-to-back exploration wells during the second half of this year, Anastasiades said

“Over the past few years we have, in fact, made some remarkable steps towards the realization of our exploration program, which we aspire will soon establish Cyprus as a natural gas producer and a transit country,” he added.

He referred to ongoing projects in the field. At present, the ministry of energy and the Aphrodite consortium were engaged in advanced discussions to establish, “the soonest possible”, the development and production plan for Aphrodite.

Following the third licensing round and the decision to grant hydrocarbon exploration licences for blocks 6, 8 and 10, to ENI/Total, ENI and ExxonMobil/Qatar Petroleum respectively, “we anticipate with eagerness” the completion of the exploration programme of all licensed companies. The second wave of exploration in Cyprus’ EEZ was initiated by the Total/ENI consortium, he said.

After the renewal of its exploration license for block 11, in February 2016, the consortium went ahead with its exploration programme, drilling their first well between June and September 2017. The Onesiphoros West 1 well resulted in a technical discovery that confirmed the existence of a petroleum system and the presence of a Zohr-like, reservoir, the president said.

“A mere two months ago, in January, we also had the completion of the first exploration well in Block 6 by the consortium of ENI and Total. The Calypso well encountered an extended gas column with excellent characteristics. This discovery also confirms the presence of the Zohr-like play in the Cypriot EEZ,” he added.