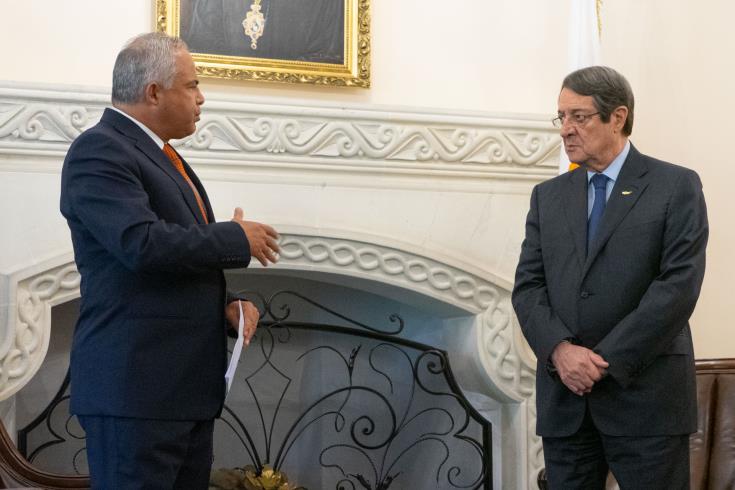 The energy sector in Cyprus is changing drastically due to the creation of the energy centre in Vasiliko and the supply of natural gas, President Nikos Anastasiades has said.

On Wednesday the President received the annual report submitted by Chair of the Cyprus Energy Regulatory Authority (CERA) Andreas Poulikkas who pointed out that the cost of electricity has decreased by 20 per cent since new pricing measures were introduced in 2017.

The President praised the work done by CERA pointing out that its efforts along with those of the government aim at freeing up the market.

He also spoke of the importance of the Euro-Asia and Euro-Africa interconnectors, which are an important development for the end of energy isolation and the price of electricity.

President Anastasiades said that the government supports CERA’s work and will stand by its side in dealing with any difficulties they might face.

Submitting the report Poulikkas said that new pricing measures were introduced in 2017 and within the year there was a decrease in costs.

He said in particular that the usage fee for the network has decreased 20 per cent from 2016 to present, adding that there has also been a decrease in the wholesale price of electricity by 3% from 2016.

According to Poulikkas the base household value price has also decreased 5.2% in the same period.

CERA Head also said that because of the coronavirus pandemic, the authority decided on an initial 10 per cent decrease in costs for two months and extended it for a further two months, following a proposal by the Electricity Authority.

He also spoke of a healthy competition to be introduced in the market by the end of 2021.

He concluded by saying that the Euro-Africa and the Euro-Asia interconnectors are expected to turn Cyprus into an energy hub.