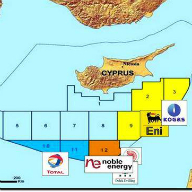 ENI company, currently prospecting for natural gas in Cyprus waters, signed recently a cooperation agreement with Korea Gas Corporation (KOGAS) to further strengthen their relationship in a number of areas, particularly in the upstream and LNG sectors.

According to a press release by Eni, the agreement will allow the companies to jointly pursue opportunities worldwide.

“The cooperation agreement confirms the success of Eni and Kogas’s partnership that so far has been involved in 5 upstream projects including Mozambique, Cyprus, Iraq, Indonesia and Timor Leste”, says the announcement.

Consortium ENI/KOGAS has been awarded exploration licenses in Cyprus’ EEZ, namely in Blocks 2,3 and 9. ENI completed 2 seismic surveys, and is planning to drill 6 wells in the coming 18 months.

Eni and KOGAS expect the cooperation agreement to facilitate the LNG development of Area 4 in Mozambique with total resources are estimated to be approximately 85 trillion cubic feet of gas in place and ready to enter in the development phase in 2015.