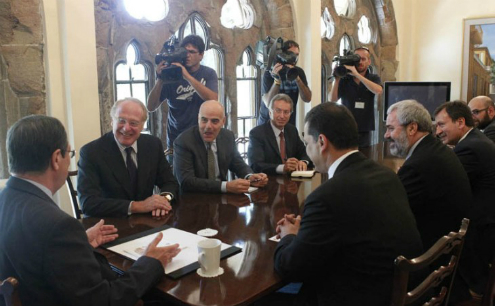 ENI to step up Cyprus exploration

The latest developments on the Cyprus problem, as well as President Obama’s statement calling for easing tension in the region, have encouraged ENI to accelerate its exploratory activities in Cyprus’s EEZ.

Energy Minister Lakkotrypis, speaking on the sidelines of the Cyprus delegation’s visit to the Holy See, announced that following some formalities the government will be signing a Memorandum of Understanding (MoU) with the company for the construction of an onshore terminal. “On Friday I had a meeting with the leadership of Italian company ENI, during which we discussed several issues, like their schedule for exploratory activity in the Cyprus EEZ,” he said. “We also discussed the issue of signing an MoU on a natural-gas liquefaction terminal. The MoU is ready, it has been agreed, and some formalities remain – like its approval by the cabinet – before it can be signed in the next few days.”

The minister explained that the MoU declares the company’s intention of working with the government on the construction of an onshore terminal in Cyprus, and went on to explain the company’s decision to accelerate its exploratory activity. “They have been encouraged by the latest developments in the Cyprus problem, and mainly by President Obama’s statement, to move forward with their activities, which will cost them hundreds of millions of euros.” Asked to provide a timeframe in the construction of the terminal, Lakkotrypis said “we will need to wait for more natural gas to be discovered before we can proceed with planning.”