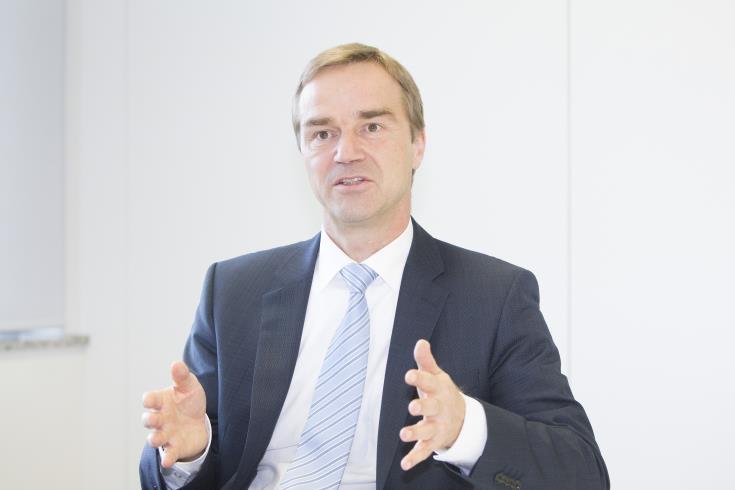 Rolf Strauch, the European Stability Mechanism’s (ESM) chief economist called for the continuation of prudent economic policies and keeping fiscal buffers as external risks, such as trade wars and Brexit, could affect the growth of small and open economies such as Cyprus.

In an interview with the Cyprus News Agency (CNA), Strauch said that despite the drastic reduction of non-performing loans (NPLs) in the Cyprus banking system, bad loans, along with high public and private debt, remain the country’s key challenges as they amount to 50% of the island’s GDP and continue to weigh on the economy.

He reiterated that Cyprus is “one of the success stories of the ESM,” posting high growth rates. But growth is projected to decelerate to about 3% closer to the country’s long-term growth potential, as part of growth moderation that “is not a Cyprus-specific phenomenon.”

“This is not a reflection of economic weakness. We see this moderation in growth as part of the normalisation phase after years of ‘above-potential growth’, leading to a cooling down also for other euro area countries and for the euro area as a whole,” he said.

He praised the Cypriot authorities for “doing a good job” in the post-crisis years in attracting investment and employment, which are important drivers of growth, but he added that vulnerabilities remain.

Strauch called for caution as “a small and open economy such as Cyprus could be exposed to external risks, such as trade wars, Brexit, and fluctuations in currencies like the Russian rouble and the Turkish lira.”

“These external risks may affect the development of the country. From that perspective, there is good reason to be prudent in terms of policies and to keep fiscal buffers,” he added.

On the country’s challenges, Strauch highlighted the NPLs, high debt, both public and private, although public debt has already been declining and is expected to continue this downward trend going forward, which “is a good achievement.”

The ESM chief economist also referred to the authorities’ initiatives to diversify the economy boosting sectors that so far have been underdeveloped, such as education and energy, noting that “countries that are able to diversify their economic structure, reduce vulnerabilities and can stay on a good growth path.”

On NPLs, a key legacy of the 2013 financial crisis in Cyprus, Strauch said that despite the significant drop in 2018, which saw bad loans decline by 60% in the last years, a large stock of non-performing loans still weighs on the Cypriot economy.

“But at the same time, their size is still about 50% of GDP. And this is clearly too high,” he added.

Strauch said last year’s significant decline in NPLs came from the orderly resolution of the state-owned Cyprus Cooperative Bank and the sale of an NPL portfolio by Bank of Cyprus, following a reform in the legal framework governing foreclosure, insolvency and sale of loans.

“We will continue to assess the situation and will be seeking the feedback of the government and the Central Bank of Cyprus,” he added.

Responding to a comment that offloading NPLs to asset management companies may lead to mass foreclosures and auctions, Strauch pointed out that banks need to comply with the regulatory requirements that are given to them, which requires an efficient management of non-performing loans.

But he noted the ESTIA scheme has been put in place foremost to protect home owners.

On the outlook of the euro area economy, Strauch said fears over an immediate recession “are clearly overdone, but at the same time we need to be cautious and prudent.”

Noting that in 2017 euro area growth was clearly above potential, Strauch noted that “what we are observing now is a maturing of the cycle.”

While downside risks come from the external side, he went on, there is some robustness in the domestic economy driven by employment, wages and consumption.

“But we have to be mindful of risks such as trade wars. Trade wars affect an economy not only directly through sanctions but also indirectly through increased uncertainty, which can undermine investments” the ESM chief economist added.

To a question whether Europe is ready to face a possible downturn, Strauch said compared with the crisis ten years ago, Europe has the ESM, which significantly strengthens its institutional infrastructure, along with the “quantum leap” the creation of the banking union which made the financial structure and the banking sector safer.

He recalled that last December’s Euro Summit decided on a set of measures in order to finalise much of the process of institutional strengthening. The tasks include, along with the ESM’s strengthening, the completion of the union with a European deposit scheme, and the discussion over a euro area budget, directed towards convergence and competitiveness in a move that would “give another layer of robustness to architecture of the euro area.”

On the completion of the ESM reform, Strauch said that the work concerns the implementation of a broader mandate, leading to a draft ESM-Treaty to be submitted for endorsement in June, first to the euro finance ministers and then to the Euro Summit for approval to be followed by a ratification process by the euro area member states.

The broader mandate’s first elements would be for the ESM to provide the backstop to the Single Resolution Fund, while the ESM jointly with the European Commission will negotiate, design and monitor financial support programmes. Moreover, the ESM is looking into its financial instrument toolbox to make its precautionary credit lines more efficient, in a bid to help countries that are affected by contagion, whereas member-states want more clarity on how we can deal with sovereign debt sustainability in the future.

Responding to a comment the two pillars of the banking union, namely supervision and resolution, are in place while the third pillar, the European deposit insurance scheme is still absent, Strauch said the banking union was clearly meant to have three pillars.

Having a common deposit insurance after an appropriate further reduction of risks is overall beneficial, he said.

“The ESM programmes would have been smaller if such an insurance were in place during the crisis. Because a significant amount of the money was spent on bank recapitalisation. That is why we think the common insurance scheme adds to the stability of the euro area,” he said, noting however that what now needs to be clarified is what are the conditions for putting this insurance in place.

“And that is precisely what we are currently discussing. There must be agreement on risk reduction before countries can jointly enter such a scheme. But the long-term objective is to have such a common deposit insurance scheme in place.”

He acknowledged that a lot has been done in risk reduction since the crisis, with reduction in NPLs, while the banking sector has also become safer through more capital and by building up bail-inable liabilities.

“It is a matter of how far you want to go. Eventually we have to agree on the conditions for everyone to sign up for a common deposit insurance scheme,” he added.

“This complexity makes them very hard to communicate and therefore less effective. There is reason to see whether the fiscal rules can be simplified to be more effective,” he said, explaining that more effective rules would mean that countries create the necessary fiscal room in good times in order to have the ability to spend in bad times.