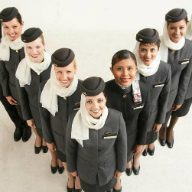 With a short ceremony held at Larnaca airport to mark five years in Cyprus, the General Manager of Etihad Airways thanked passengers for choosing the national airline of the UAE for both business travel and leisure purposes.

On occasion of the fifth anniversary of operations in Cyprus, Etihad Airways had a number of surprises in store for its passengers on Monday, June 16, in collaboration with Hermes Airports.

One of the highlights included being flown to Abu Dhabi in one of the company’s aircrafts dedicated to Formula 1.

During the ceremony, a cake was cut to celebrate the event and treats were offered all round.

Etihad recently announced the increase of its base frequency on the Abu Dhabi - Larnaca route from three to five flights per week. The airline will also operate from Larnaca as a daily service during the peak summer period from July 1 to September 30.