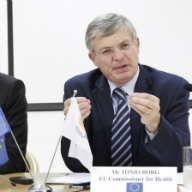 The National Health Scheme the government has pledged to fully implement by July 2016 would have been necessary even if the economic crisis had not occurred, the EU Health Commissioner Tonio Borg said recently.

Borg, who is on an official visit in Cyprus, had a meeting with the Health Minister Philippos Patsalis and discussed the implementation of the National Health Scheme (NHS), the autonomy of hospitals and other health reforms such as the introduction of e-health, and the digitalisation of patients’ records. Speaking after the meeting, Borg said that there was no viable public health system in Europe without reform and that the crisis had only accelerated the introduction of necessary changes in Cyprus.

He added that it would take time to explain the reforms to those affected and that Patsalis had set a very ambitious time frame for their introduction in three phases. He said that the EU health commission would stand by Cyprus as these phases were implemented.

“The Commission is there to help EU governments,” he said. He also said that Cyprus had come a long way with the NHS and that he had no doubt that Patsalis and the government would create an efficient and viable health system.

“I am sure that Cypriots are adaptive enough, including the politicians, to know how to receive the messages of a crisis,” Borg said.

Compared to other countries, Borg said, public health expenditure in Cyprus was relatively low and that the NHS would cover more citizens.

Patsalis said that the health commission’s assistance to Cyprus was very important.

“The World Health Organisation along with the EU play a defining role in these national health reforms,” Patsalis said. Patsalis described the NHS as a complete, socially fair and economically viable scheme, far removed from the current unfair system.

“It is a system that will face the many inequalities of the current system, which were unfortunately revealed due to the economic crisis,” Patsalis said.

Borg also visited with Patsalis the Cyprus Institute of Neurology and Genetics (CING) and said that he was impressed by the institute’s work.

“I admire the things achieved thanks to the vision there is and this shows that even a small country can contribute with great ideas,” Borg said.

Patsalis said that they chose CING to visit because the commissioner had asked to see an institution that was very successful in using European programmes and especially in the health sector.