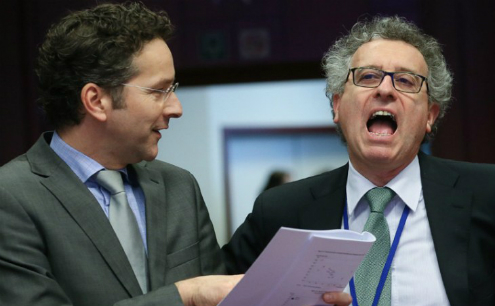 Cyprus' economy has been proved more resilient than expected, says VP of the European Commission Olli Rehn, expressing his confidence that the authorities will continue to ensure that it remains so.

Olli Rehn was talking at a press conference in Brussels following the Eurogroup meeting which dealt with countries that are in a bailout adjustment programme. Jeroen Dijsselbloem, president of the Eurogroup, praised Cyprus for keeping up with the programme targets, expressing his hope that the island’s banking sector will stabilise soon, adding that Cyprus is in its second phase of relaxations to capital controls. “The Commission continues to support Cyprus and the Cypriot people through what remains a very difficult period of economic adjustment,” said the EC vice-president.

The positive remarks from Eurogroup president and the European Commission were largely expected, after the third review by the troika of international lenders that concluded recently found that Cyprus surpassed the targets set in the bailout adjustment programme. The vice-president of the European Commission noted that in general the euro area economy is now on track for expected acceleration, clarifying that this is no reason for complacency. “Instead, it is as essential as ever to maintain the momentum of economic reforms to bolster the recovery in the months ahead and accelerate the fall in unemployment which we are beginning to see in several countries,” he explained.

According to managing director of the European Stability Mechanism (ESM) Klaus ReglingCyprus is expected to receive €4.4 billion until 2016. Regling added that the island is to receive €2.1 billion in 2014, of which €150 mil is expected to be given the green light after a Eurogroup meeting on Cyprus on March 10.