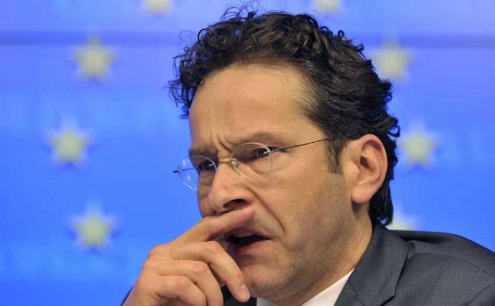 The Eurogroup gave its blessings to the disbursement of €3 billion to Cyprus yesterday, with the first €2 billion already sent to the island as part of the first tranche of a €10 billion bailout expected to “buy time” for its ailing economy.

The group of eurozone finance ministers met for nearly six hours in Brussels yesterday, discussing among other things the bailout programmes of Cyprus and Greece and the troika’s assessment of Cyprus’ anti-money laundering measures.

Both disbursements will be made in cash, and will be used for the general financing needs of the public sector, including the considerable sum of maturing debt the government is expected to pay next month, and the country’s fiscal needs. “The loans granted by the ESM help to maintain financial stability in the euro area and buy time for Cyprus,” Klaus Regling, Managing Director of the ESM said. “This time enables Cyprus to undertake the reforms necessary to rebuild its economy on a sustainable basis.”

In accordance with the Eurogroup decision on March 25, Cyprus will receive assistance of up to €10 billion during the next three years.

Cyprus signed a Memorandum of Understanding (MoU) with the European Commission containing many reforms demanded of the government in exchange for the loan at the end of April. Compliance with the MoU will be reviewed every three months before the next tranche is disbursed, with the first review likely to be in September. Repayment of the loan will begin in ten years’ time and have a maximum maturity of 20 years while the interest paid will likely be between 2 and 3 per cent, depending on the ESM’s costs. No portion of the €10 billion can be used to recapitalise the island’s biggest bank, Bank of Cyprus or Laiki, whose losses were considered too big to be covered by the EU. Instead, €3.4 billion of the funds will be used to cover Cyprus’ fiscal needs, €4.1 billion to redeem its medium and long-term debt, and €2.5 billion for the recapitalisation of Cyprus’ other banks.

Cyprus is not only the first fully fledged macro-economic bailout financed by the ESM, it is also the first country forced to contribute to its rescue package with a “bail-in” of over €10 billion by uninsured depositors of the island’s two biggest banks. A further estimated €3 billion will come from privatisations, state gold sale and fiscal adjustments.

On concluding their meeting late last night, eurozone finance ministers welcomed the ESM’s approval of the first tranche. Eurogroup President Jeroen Dijsselbloem said it was an “important step towards the stabilisation of the Cypriot economy reflecting our unwavering commitment to preserving the financial stability of the euro area and its member states”. The Dutch finance minister noted that Cyprus implemented all prior actions as agreed in the MoU before yesterday’s ESM decision on the first disbursement. “The Eurogroup commends the Cypriot authorities for delivering on their commitments to date and reiterates its appreciation and understanding of the efforts made by the Cypriot citizens,” he said.

Dijsselbloem also referred to the independent assessments of compliance with the anti-money laundering (AML) framework in Cyprus prepared by the Council of Europe’s Moneyval and Italy’s private auditor Deloitte Financial Advisory. A private audit of Cyprus’ AML framework was made a precondition of any bailout by the Eurogroup.

According to Dijsselbloem, the troika reported the key findings of the two AML reports to the Eurogroup and recommendations to “rectify deficiencies” will be integrated in the AML action plan to be agreed between the troika and Cyprus during the first review of the bailout programme in three months’ time. “The action plan will need to target areas covering implementation of customer due diligence by banks, including through adequate supervision, and the functioning of the company registry, among others,” said the Eurogroup president.

According to the Cyprus News Agency, speaking to reporters, Dijsselbloem said the AML report shows that the legal framework in Cyprus is appropriate though there are some delays in its implementation.

There has been much speculation on the outcome of the anti-money laundering parallel audits given that allegations of money laundering, particularly by German lawmakers and media, were most rife in the months preceding the Eurogroup decision for a ‘bail-in’ bailout of Cyprus. The EUobserver last week reported that opinion in Brussels was divided as to whether the actual AML report will ever be released, which would provide welcome clarity on the extent to which Cyprus truly was guilty of the accusations of money laundering, made by various EU partners.

Earlier this month, Finance Minister Harris Georgiades said Cyprus was given a clean bill of health in terms of its compliance with international anti-money-laundering rules. “The situation for Cyprus is far better than what perhaps many abroad wished to portray,” the minister said, adding that any ‘loopholes’ in the local AML system would be closed.

Financial online news site Stockwatch yesterday reported that the ALM report states banks do not perform adequate due diligence on foreign clients while there appears to be excessive dependence regarding the identity and quality of clients on the introducers, ie, accountants, lawyers and fiduciary service providers. Problems were also reportedly found with the registrar of companies, complicating efforts to find information on beneficiary companies.

One German anti-money laundering expert, Andreas Frank, who has been following closely implementation of AML legislation around Europe yesterday noted that the ESM press release, issued almost five hours before the Eurogroup statement did not contain any mention of the results of the AML probe of Cyprus’ financial sector.

The ESM decision was alleged to be contingent on the results of the probe and improvements on the assumed money laundering deficits in the Cypriot financial sector, he said. “To get the approval from the Bundestag for the rescue package, the German government had assured the MPs that the ESM would agree to the aid package only under the conditions that the money laundering allegations against Cyprus would be clarified. It becomes obvious that the Bundestag MPs were deceived and the ‘dirty money’ claims by some Eurogroup members were just an excuse for the bail-in,” he added.