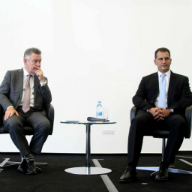 The economic impact on Cyprus of the Russian embargo on agricultural products from the EU was raised by President Nicos Anastasiades with the European Commissioner for Trade Karel De Gucht in Nicosia recently.

In the meeting, De Gucht updated Anastasiades on the EU’s attempt to secure access to new markets, like the US or Canada, as well as other options to compensate member states for their losses.

According to Commerce Minister Yiorgos Lakkotrypis, who was also present, the EU’s trade relations with neighbouring countries, as well as recent developments with regard to the Ukrainian crisis were discussed.

“The president raised the issue of countermeasures imposed by the Russian authorities against EU member states and how they impact our country, to a larger extent than they impact other European countries, precisely because exports to Russia form a larger part of our total exports,” Lakkotrypis said.

“The Commissioner listed the measures considered by the EU, primarily in trying to access new markets – he mentioned the US and Canadian markets – and, failing that, examining other options of compensating member states for their losses,” he added.

Asked to comment on whether the EU was determined to continue the policy of sanctions against Russia, Lakkotrypis said that “further measures are under discussion at present, and Cyprus, via its foreign ministry, is keeping a close eye on developments.”

The value of Cyprus’ annual exports to Russia amounted to approximately €13.5 million in 2013.

“We can assume that the likely impact for 2014 will be at or near this level,” Lakkotrypis said.

With regard to who would foot the bill for any compensation payable, Lakkotrypis offered little clarity.

“That is under discussion on an EU level, and on the level of agriculture ministers,” he said. “The issue is under discussion and my understanding is that a Council session has been scheduled for Friday – we’ll see what comes out in the coming days.”