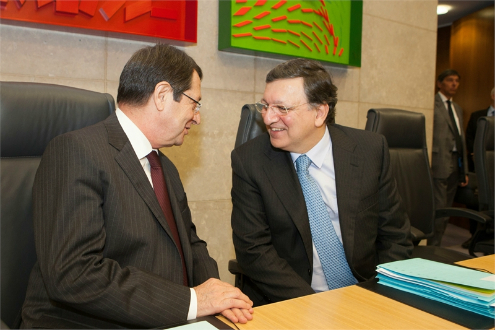 The President of the European Commission yesterday said the commission would be supporting Cyprus as it started to put together the pieces of its crumbling economy and as it tried to push forward on peace talks on the Cyprus problem.

Jose Manuel Barroso met with President Nicos Anastasiades in Brussels yesterday morning before joining the college of commissioners along with other members of the Cypriot government for a plenary debate. Accompanying Anastasiades were his government spokesman, the director of his diplomatic office, and the ministers of finance, foreign affairs, labour, energy and agriculture who also held separate meetings meetings with their counterparts and other EU officials. “We have discussed, during our meeting, precisely what we can do in concrete terms to support Cyprus,” Barroso said during a joint press conference with Anastasiades. He congratulated authorities for implementing the bailout programme and highlighted the need for Cyprus to reduce its unemployment levels, particularly where it came to the under-25s, some 44% of whom are out of work, well above the EU average of 23%. Barroso encouraged authorities to make use of the technical assistance offered through the Cyprus Support Group, set up earlier this year to helpthe island weather the crisis and “nurture new sources of growth”.

Though Barroso was careful to refer to Cyprus’ sovereign right to decide on howto handle its natural gas resources, he advised the government to take a good look at the investments Cyprus needed to make. Authorities are keen to take advantage of hydrocarbon reserves in the eastern Mediterranean via a natural gas liquefaction facility, but confirmed qualities of natural gas are not yet enough to render the project viable. Barroso said the Commission was fully supportive of peace talks to resolve the Cyprus problem. The latest efforts to agree on the wording of a joint statement by Greek Cypriots and Turkish Cypriots have failed. The two sides – living apart on the island for almost four decades – have been unable to agree on how to resume stalled peace talks. “It has not been possible so far to find a solution, but I believe now there is a genuine opportunity to reach a solution once and for all,” Barroso said. “Like President Anastasiades, I very much hope and expect that fully fledged negotiations will be re-launched soon.” Barroso said the Commission would enhance its “involvement, participation and visibility in the process” once they saw “concrete progress”.

Government spokesman Christos Stylianides told state broadcaster CyBC during a telephone interview late yesterday that Barroso’s statements demonstrated their willingness to have an “enhanced role” in the Cyprus problem and also their agreement on the need to have a joint communiqué, which Turkish Cypriot leader Dervis Eroglu had proposed skipping. Barroso said yesterday the commission supported “efforts in agreeing on a joint statement with the other party”. “An agreement on it will facilitate the process of negotiations,” he said. Anastasiades’ meeting with Barroso as well as his meeting with European Council President Herman Van Rompuy, focused predominantly on the Cyprus problem, Stylianides said.

Anastasiades said during the press conference they had expressed their wish for a more active EU involvement in the peace process. He also referred to the economy, thanking the EU for deciding to allocate a further €200m in the Cyprus budget for 2014-2015, as well as increasing its funding involvement to up to 95 per cent for EU co-funded projects. “I hope this day marks a departure point for further deepening of our relationship with the European Union and the Commission,” Anastasiades said. “The path out of the financial crisis to prosperity and growth goes through the EU. This is the central message we take back with us today,” Anastasiades said.