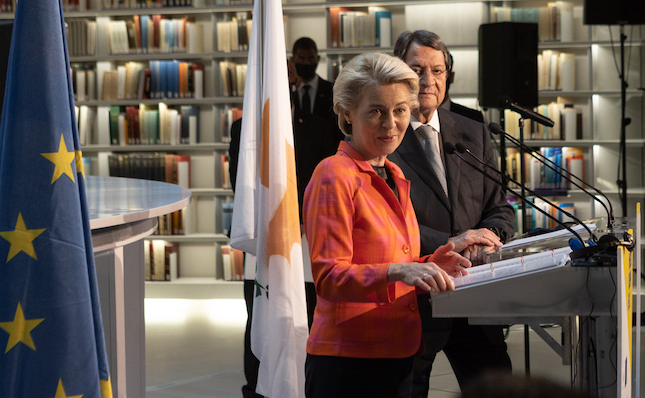 Brussels is promoting the idea of creating a bi-communal solar power plant that would “contribute to meet the energy needs of both communities”, European Commission President Ursula von der Leyen told the Cyprus News Agency.

She said the Commission has “prepared the ground for developing a pre-feasibility study”.

Von der Leyen said there could be an agreement on the distribution of electricity generated from natural gas using the FSRU Terminal under construction, which could launch “a broader discussion about energy management in Cyprus”.

“If well implemented, we believe that this confidence-building measure would facilitate the reunification of Cyprus.”

In her interview, Von der Leyen argued Cyprus could contribute to the EU’s energy security ahead of the winter through energy savings and explained the bloc is focusing on diversifying its natural gas sources to prevent dependencies in the future.

She believes most Europeans understand the need for sanctions against Russia for its invasion of Ukraine.

“The Commission is active.

“We have prepared the ground for the development of a pre-feasibility study to establish a bi-communal solar power plant, compatible with the technical requirements of the power grids.

“This facility would contribute to meeting the energy needs of both communities, increasing the rate of renewable energy sources in the energy mix, in line with the European Green Deal.

“Energy is a key sector for Cyprus.

“It holds great opportunities for the communities to come closer.

“The Commission is ready to support the efforts in this sector, including planning a future unified energy system.

She said through the Technical Support Instrument that the Commission is supporting Cyprus with the deployment of renewable energy sources and the promotion of energy efficiency.

“We have also supported the Cypriot authorities in finalising its Territorial Just Transition Plan.

“Thanks to this, Cyprus will benefit from €101 million under the Just Transition Fund for the shift towards a low-carbon economy.

“And we are now working with Cyprus on its new National Hydrogen Strategy.”

Von der Leyen was asked how Cyprus could contribute to natural gas savings ahead of the winter, given it does not use gas for electricity production or heating, and whether new LNG terminals being constructed or proposed in Cyprus could make a difference.

The Commissioner President pointed out that “energy savings, from all sources, contribute to building our resilience at European level”.

“There is no small contribution.

“The more we save and the quicker we do it, the safer we will be.

“Moreover, it is important to send to the markets a signal of EU unity and solidarity. This will help stabilise them.”

“This is why agreement by the Member States on coordinated measures for an EU-wide reduction of gas demand, based on our preparedness plan, is good news.

“In the space of one week, the EU has agreed to take an unprecedented and decisive step to face down the threat of a full gas disruption by Putin.

“The collective commitment to reduce gas consumption by 15% is significant. It will help fill our storage ahead of winter, mainly on continental Europe”.