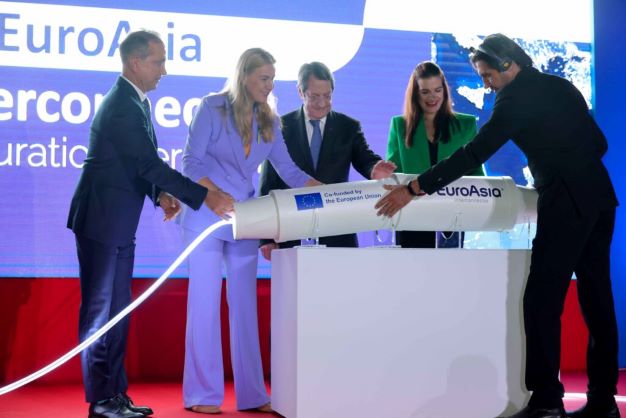 A project which will connect the Cypriot, Greek and Israeli power grids through the world’s longest submarine power cable which will total over 1,200 kilometres with a 2,000 Megawatt capability that will allow Cyprus to have an excess of renewable energy that could be exported or exchanged, has been inaugurated.

Present at the event to inaugurate the EuroAsia Interconnector was the EU Energy Commissioner Kadri Simson, along with the energy ministers of Greece, Israel, Egypt and Jordan, who earlier in the day attended the Eastern Mediterranean Gas Forum.

Addressing Friday night’s event, President Nicos Anastasiades described the day as historic “since, after years of deliberations and hard work, we are now in a position to proceed with the construction phase of the “EuroAsia Interconnector”, an emblematic project of great geopolitical, strategic and national importance,” he said.

The current works will focus on the Cyprus-Crete section of the project. Final construction of the electricity interconnection is expected to be completed by the end of 2027 after the project promoter secured all the relevant permits and binding offers from the world’s leading manufacturers in the energy field: Siemens and Nexans.

Commissioning is expected to follow in the first half of 2028, the president said. He said the project would lead Cyprus to the path of a new energy era, since, as it would end the island’s energy isolation. Cyprus is the last non-interconnected EU member-state. It would also create strong perspectives both for the development of the economy and the broader progress of the country and its citizens, Anastasiades said.

The project would ensure the security of energy supply, diversify Cyprus’ energy mix, promote competition in the electricity market and achieve environmental and energy objectives towards a more competitive, sustainable and greener economy. The same benefits would apply to the two partners, Greece and Israel, he added. “The realisation of the project “EuroAsia Interconnector” constitutes not only a historic milestone for our country, but for Europe itself, since it will connect the Old Continent with the Middle East.”

The EuroAsia Interconnector is a Project of Common Interest (PCI) for the European Union and has received the universal support of all European institutions, Anastasiades said, adding that the bloc had earmarked €657 million for its construction, the largest grant ever given out under the ‘Connecting Europe Facility’. The island’s Cabinet has also approved the allocation of €100m grant to the project through the Cyprus Recovery and Resilience Plan. The total cost will be €2.5bn.

It is expected that in addition to ending the energy isolation for Cyprus, it will also provide an electricity highway to Europe, an interconnection that is particularly critical given European energy issues due to the war in Ukraine. The pipeline at a maximum submarine depth of 3,000 metres will consist of direct current cables and onshore conversion stations at each connection point.

Anastasiades said the project would establish a reliable alternative energy corridor and contribute to the EU’s climate and energy goals by integrating renewables. He also ambitiously suggested that the EuroAsia Interconnector would also Contribute to the EU target for electricity interconnection between member-states by 2030.

Anastasiades told his audience that the project constitutes tangible proof of the benefits of the trilateral and multilateral co-operation established with regional neighbours with the aim of promoting stability, peace and prosperity in a volatile region.

“Through coordinated and collective action, we are confident that we can create in effect an East Med Energy Corridor by expediting mature projects and moving forward with the realisation of the synergies required for viably exploiting both our indigenous hydrocarbon and renewable resources,” he said.

The outgoing president added that projects such as the Eurasian Interconnector and the EuroAfrica Interconnector between Cyprus, Greece and Egypt fit very well into this discourse both for their substance, but also for their strategic value in energy provision and security from the Eastern Mediterranean to continental Europe.

“All of the countries involved are committed to making these key infrastructure projects a reality. We have, thus, all agreed upon bilateral and trilateral Memoranda of Understanding, which map out next steps in implementing the emerging Eastern Mediterranean Energy Corridor,” he concluded.

Ktorides said that through the electricity corridor that is being created, the EU can be securely supplied with electricity produced from Renewable Energy Sources and gas reserves in Cyprus, Israel and Greece, a development that will contribute to the EU’s energy transformation and the integration of the European internal market. The project, Ktorides added, also paves the way for the development of Renewable Energy Sources up to 51 per cent by 2030 and a reduction of Carbon Dioxide (CO2) emissions, as set out in the European Energy Targets, making it more possible to achieve a 55 per cent reduction in net greenhouse gas emissions by 2030, compared to 1990 levels.

For her part, the EU Energy Commissioner Kadri Simson said that “due to the energy crisis we are going through, the importance of this project is more important than ever. I am deeply convinced that we can only weather the storm if we work together”.