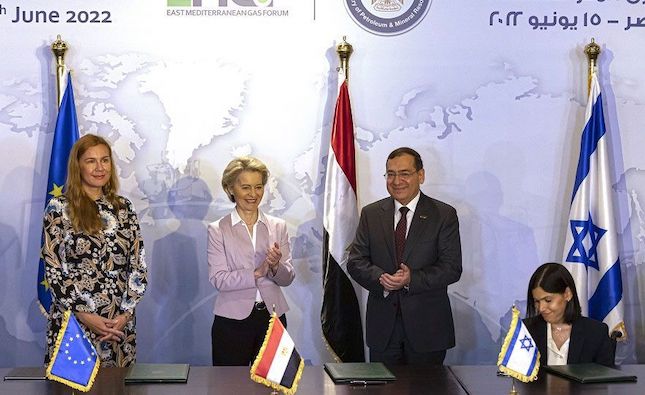 Tapping into Israel’s vast renewable sources of energy will help reduce the EU’s dependence on Russia, European Commission President Ursula von der Leyen said during her visit to Israel, highlighting the importance of Cyprus and Greece in securing energy supply.

During the Honorary Doctorate degree ceremony at the Ben Gurion University of the Negev on Tuesday, von der Leyen said, “we are now exploring ways to step up our energy cooperation with Israel. We have two major projects in preparation: the world's longest and deepest underwater power cable, connecting Israel with Cyprus and Greece. This will over time become electrified by renewable energies. That is where the investment has to go into.”

It is noted that in January, the European Union earmarked €657 million for the construction of the 2,000-megawatt EuroAsia Interconnector subsea electricity cable that will link the power grids of Israel, Cyprus and Greece, utilizing funds from the ‘Connecting Europe Facility’.

Earlier today, Commission spokesperson for energy affairs Tim McPhie told CNA that the memorandum of understanding signed between the European Union, Israel and Egypt on transferring Israeli natural gas to Egypt where it will be liquefied and transferred to the EU could potentially include natural gas from member states,

Responding to a question during Thursday’s midday briefing in Brussels regarding the role Cyprus has to play in the Commission’s strategy for energy diversification, McPhie said that the memorandum “covers gas from any source in the region and that would include potentially those from EU members states.”

McPhie also underlined that “the deployment of gas resources from the Eastern Mediterranean region is an important part of our diversification strategy that we’re working on at the moment under the broader label of REPower EU.”

The spokesperson explained that the trilateral memorandum could potentially increase volumes delivered to the EU from about five today to seven bcm by the end of this year, and double those volumes going forward.

Regarding the potential for natural gas imports to Cyprus, the spokesperson said that the floating storage and regasification unit in Vasiliko is expected to become operational next year, with a potential capacity of around two bcm.

The spokesperson was referring to the terminal currently being constructed at Vasilikos, and not the proposal which is being assessed by the government for the construction of a separate floating liquefaction terminal for Israeli natural gas.

Responding to a question on the progress regarding the proposed EastMed pipeline, McPhie recalled that the Commission is funding a feasibility study through the Connecting Europe facility and that the project is included in the EU’s list of Projects of Common Interest.

“That study is still underway, it’s being carried out by the project promoters. It is for them to continue that work and then decide whether to go ahead with the construction of the pipeline, depending on its commercial viability and the demand in the region and also looking to the contribution to the Green Deal and our broad strategies,” he said.