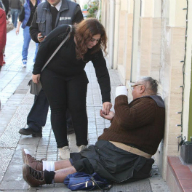 Almost everyone surveyed in the latest Eurobarometer report on Cyprus believes the economy is in ‘bad’ or ‘very bad’ shape but there was that 3.0% who thought it was ‘good’ or ‘very good’.

The survey was conducted on behalf of the European Commission from November 2 to 17 using personal interviews. According to the results, 97% of Cypriots perceive the state of the country’s economy as ‘bad’ or ‘very bad’, with 3.0% apparently rating it ‘good’ or ‘very good’. The European Union’s (EU) corresponding mean responses were 68 and 31%. In terms of outlook over the next 12 months, only 7.0% of Cypriots anticipate an improvement, with 72% expecting it to deteriorate and 19% predicting the situation would remain the same.

The state of the labour market in Cyprus is perceived to be ‘bad’ or ‘very bad’ by 98% of Cypriots, with 2.0% considering it ‘good’. The EU corresponding averages are 78% (‘bad’ or ‘very bad’) and 20% (‘good’ or ‘very good’). Over the next twelve months, only 5.0% of Cypriots expect the labour market to improve, while 74% foresee further deterioration. Regarding the direction their country is heading in, 64% of Cypriots say it is heading ‘in the wrong direction’ and 13% believe the country’s direction is right.

Cypriots consider the two major problems facing their country to be unemployment, 77% and the state of the economy, 74%. The Cyprus government enjoys the trust of only 26% of Cypriots (higher than the EU-wide 23%), while 68% say they do not trust the government. The Cyprus parliament enjoys the trust of a mere 18% of Cypriots, with 77% stating their distrust. A similar pattern emerges with respect to trust towards political parties. Only 7.0% the parties with 91% saying they distrust them.

When it comes to the EU, only 17% inCyprus say they trust the bloc with 75% distrusting it. The overall corresponding averages in the EU are 31 and 58%. The United Nations (UN) is also low on trust in Cyprus with only 18% saying the trust the international organisation and 74% distrusting them. Asked whether the EU was responsible for current austerity, 77% of Cypriots responded in the affirmative and 19% think not.