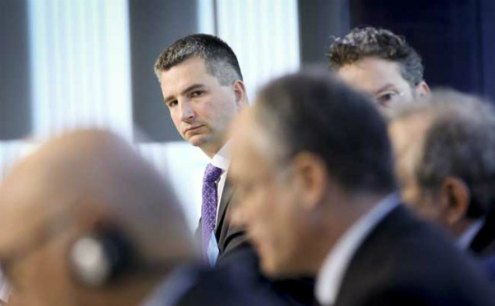 Eurogroup approves next tranche for Cyprus

Eurozone finance ministers approve handing out the next tranche of bailout loans for Cyprus after the country met the last two conditions for the payout.

To get the €350m tranche from the European Stability Mechanism, the eurozone bailout fund, Nicosia had to amend laws on foreclosures and forced sales of mortgaged property in line with a deal with its international lenders.

A document prepared for the minister’ meeting in Brussels said: “The programme partners find that Cyprus has complied with the conditions for a positive conclusion of the fifth review.” It added that the pay out would be recommended so long as this situation remained unchanged.

“Today the eurogroup reaffirmed the significant progress made on reforms for the economic recovery of the Cypriot economy,” Finance Minister Harris Georgiades said.

“The process of releasing €350 million (in aid) which our economy needs has started,” he said.

Georgiades also struck a note of caution, evidently directed at quarters back home.

“Unnecessary moves that may jeopardise this significant development must be avoided,” he noted.

It’s understood he was alluding to opposition parties’ intentions to push through parliament a new bill delaying for six months implementation of the foreclosures legislation.

“First and foremost, confidence in the Cypriot economy, a necessary precondition for a definitive recovery and a return to growth, must be safeguarded,” Georgiades added.

Reports said the instalment would likely be disbursed on December 8, the date of the next scheduled meeting of the Eurogroup.

The EU and the IMF reached a deal in March 2013 to extend €10bn in aid to Cyprus, staving off bankruptcy from exposure of its banks to indebted Greece, and fiscal slippage.

A new tranche of aid – Cyprus has received about half of its bailout amount – had been delayed amid disagreement from local lawmakers on provisions of a foreclosures law demanded by lenders to make rising non-performing loans of banks more manageable.

The Supreme Court last week declared unconstitutional legislative amendments which essentially weakened the foreclosures process and which lenders had objected to.

The IMF a bailout partner, is also expected to release €85m as part of the same tranche.

The next review by international lenders of Cyprus’ adjustment programme is expected to take place in January.