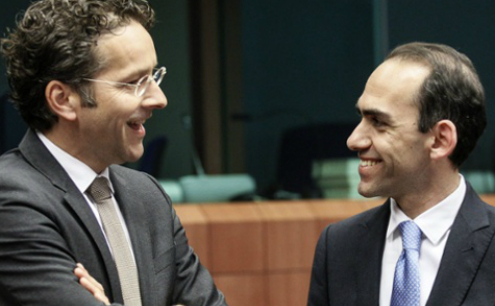 The Eurogroup has approved theroadmap for the privatisation of semi government organisations (SGOs), a requirement to release the next tranche of the island’s assistance programme.

The privatisation programme, which is controversial on the homefront – was a precondition for the disbursement of the third tranche amounting to €186 million. Out of this amount, the European financial stability facility (EFSF) will grant €100 million by the end of the year and the International monetary fund (IMF) €86 million by December 20. So far Cyprus has received €4.7 billion from the €10 billion in financial assistance. The privatisation plan aims at securing €1.4 billion to reduce the island’s public debt.

Speaking on TV news, Irena Georgiadou, a finance ministry associate, said there had been some initial reservation from the Eurogroup about the privatisation plan as drawn up by the government, but in the end finance ministers were convinced, she said. “We know what the lenders want and we are working towards that direction,” Georgiadou said. She added that the privatisation plan was designed with flexibility in mind, to provide with solutions tailored to each SGO.

In a written statement after its meeting, the Eurogroup welcomed the conclusion of the troika’s second review mission last month indicating that the adjustment programme was on track. “Macroeconomic conditions are developing in line with programme projections, albeit uncertainty remains high. Fiscal consolidation is advancing in line with the agreed consolidation process,” the Eurogroup said. It added that structural reforms were progressing, “although in some cases further efforts are required”. Progress continues to be made as regards the recapitalisation and restructuring of the financial sector, including a further gradual relaxation of administrative measures. “We commend the Cypriot authorities for the progress achieved in this review and underline that a full and timely policy implementation remains essential to address the many challenges that the Cypriot economy is facing,” said the Eurogroup. “In particular, we welcome the firm commitment of the Cypriot authorities to strengthen the privatisation plans as agreed with the troika institutions.”

Finance minister Harris Georgiades, during an event organised by the Permanent Representation of Cyprus in the EU in Brussels earlier in the day, said that privatisations were essential, adding that Cypriots had only themselves to blame for the financial crisis. “It’s indecisiveness, hesitations, wrong assumptions and the failed policies of these last years that steered Cypriot economy to troubled waters,” the finance minister said. Georgiades reiterated that the Cyprus government was obliged to proceed with privatisations, as per the updated memorandum agreement, characterising them as both “ambitious” and “necessary”. “It’s not my intention to present a rosy picture of the Cyprus economy, which is still in recession with an unemployment rate of 17% but I’m convinced that problems can be solved and that Cyprus has positive prospects,” he added.

The finance minister also assured that no new taxes would be introduced, noting that maintaining taxation stability would benefit the economy on a macroeconomic level. “Special emphasis will be given on structural reform. In the next 2-3 years we plan on reforming public businesses, our health system and taxation policy. Along with our ambitious privatisation plan, we will create the conditions to attract foreign investments. With these reforms we will create the basis for a viable financial model for Cyprus,” he added.

The privatisations road map was approved unanimously by the cabinet on December 4. The process will be evolutionary, and expected to last three years. Each organisation will be handled accordingly, depending on the nature of the service it provided, according to the road map. Unions oppose the privatisations and have already staged warning strikes. They have threatened to escalate if the government went through with its plans. Based on the roadmap, the first organisation slated for privatisation is state telecommunications company CyTA.