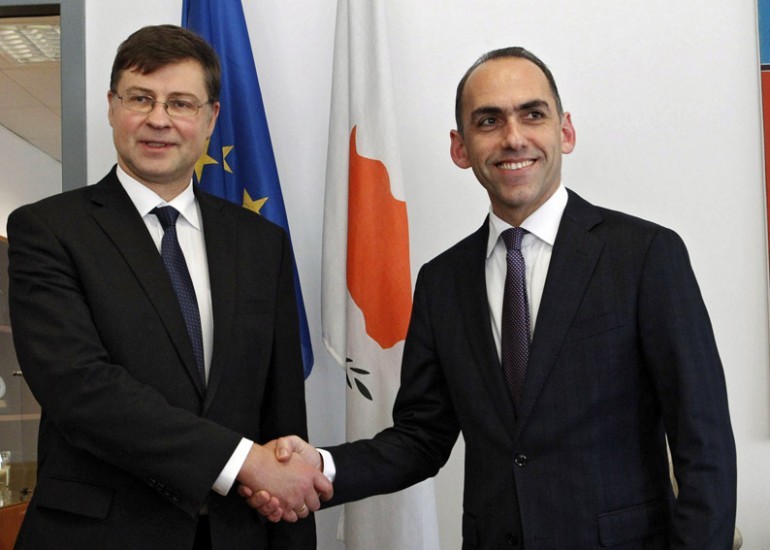 Europe looks at fiscal impact of a united Cyprus

The European Commission is evaluating the fiscal impact of a possible reunited Cyprus, its Vice President Valdis Dombrovskis said, welcoming the end of the island's economic adjustment programme.

“We are evaluating the impact of a possible reunification within 2016, we are seeing that there is a positive momentum and on behalf of the Commission we maintain the issue high in our political agenda,” Dombrovskis told the press in an interview.

He reminded that the Commission had transferred the competencies associated with the reunification of Cyprus under the direct supervision of Commission President Jean-Claude Juncker and himself.

“We are in close contact with both communities, providing technical support and discussing different issues and actions that need to be taken,” he said, adding that in case of a settlement the EU acquis would be implemented throughout Cyprus.

Dombrovskis said the EU held discussed various versions of fiscal federalism “and we are ready to assist Cyprus to choose which method the two communities consider as appropriate but also to prepare the necessary structures.”

He also commended Cyprus for concluding its economic adjustment programme.

“Cyprus has worked very hard to stabilise its economy, to return to sustainable growth and sustainable public finances and to implement an ambitious reform agenda,” he said.

Results that were better than expected and the island will not only have a sizeable primary surplus but also, according to Commission forecasts, a general budget surplus, while its public debt is on a downward trajectory and will decline below 100% of GDP in 2016 and continue to decline in the coming years.

The Commission VP also said a significant number of reforms had been concluded, but pointed out that Cyprus should remain on track with regard to fiscal discipline and structural reforms where there are many significant issues to be finalised in the future in areas such as the stabilisation of the financial sector, the competitiveness of the economy and the national health scheme.

Dombrovskis also said Cyprus would be part of the regular surveillance mechanism such as the European semester and the macroeconomic imbalances procedure.

“It is important that Cyprus had impressive performance in the last years but there are significant persisting imbalances that need to be tackled,” Dombrovskis said.

Cyprus failed to meet one prior action of the last tranche as parliament did not approve a bill providing for the creation of a state owned private telecommunication company, which would absorb the public telecoms operation, as part of a privatisation scheme.

“The prior action had more to do with CyTA’s administrative structure and we believe that this would strengthen the competition of the Cyprus telecoms sector to the benefit of the consumers,” he said.

“Of course Cyprus had smaller financing needs, as it had better fiscal performance. Cyprus already has significant fiscal buffers, the financing needs in the next years are small therefore the government did not need to use the whole financial envelope,” he said.

Asked whether the decision of the ECB to exclude Cyprus from the public bond purchasing programme was a source of concern, Dombrovskis said Cyprus had returned to the markets, it tapped internal borrowing and its financing needs in the next years are small.

“In that sense we are sure that Cyprus can cover its financing needs on its own,” he said, pointing out that Cyprus has already tested the markets several times.