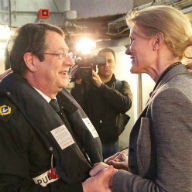 ‘Excellent’ meeting on board the Danish frigate

The two met for around 30 minutes on board the Danish frigate HDMS Esbern Snare, anchored off the coast of Larnaca, before Anastasiades was whisked back to shore on one of the frigate’s inflatable boats. Speaking after the “excellent” meeting, the Danish PM said she congratulated the president on recently concluding a joint declaration with Turkish Cypriot leader Dervis Eroglu. The first head of state to visit the island following the agreement to restart the talks, Thorning-Schmidt noted the “historic” timing of her visit, saying: “I really wished the President well in his endeavours to make this reunification happen.” She added: “It is a special time in history and I told him how much I and the whole international community appreciate his personal efforts to make this change in Cyprus that has been divided too long.”

For his part, Anastasiades, wearing in a black navy jacket with, expressed his warmest thanks to the PM for Denmark’s help during the 1964-1992 tour with the United Nationspeace keeping force, and also for what the Danes “intend to do in order to help us find a peaceful solution to the Cyprus question”. Doing his bit for tourism, Anastasiades added: “We look forward to seeing you back in Cyprus as an official visitor or as a holiday-maker.”

The two leaders sit next to each other at European Council meetings in Brussels though it is believed this was their first opportunity for a real exchange of views. By and large, Anastasiades currently enjoys the good will of the international community regarding efforts to reach a solution. For many foreign powers, his stance in 2004 in favour of the Annan plan showed a certain boldness and ability to see the long-term, making him a credible partner ten years on. Fully aware that he cannot present the Cypriot people with a carbon copy of the Annan plan, Anastasiades has made respect for EU laws and principles the guiding light of his effort to reach a negotiated settlement. He has also lobbied hard in Europe and the US for pressure to be applied on Turkey to agree to a series of confidence-building measures (CBMs) which would change the negative climate and cultivate trust between all sides.

Anastasiades hopes that Turkey will also show good faith and implement the Ankara Protocol, opening Turkish ports and airports to Cypriot vessels and aircraft, while automatically leading to the unblocking of eight chapters – frozen by the European Council – in Turkey’s EU accession negotiations. Aiming high, the president also wants to see a deal that would see Varosha opened up to its lawful residents. For this, the Cypriot leader appears ready to talk about unfreezing some of Turkey’s six EU chapters unilaterally frozen by Cyprus, but not before. There is currently a growing momentum within the EU to open chapters 23 and 24 on Turkey’s judiciary and fundamental freedoms.

Asked about Denmark’s position, Thorning-Schmidt said: “We are hoping that we can open those two chapters and that is one of the reasons why we are so interested in what is happening here. Of course, reunification will be a tremendous advantage for the Cypriot people and that’s the most important, but we are also hoping that it could create a new situation in terms of the negotiations between EU and Turkey.” Danish Ambassador to Cyprus Casper Klynge, also on board for the meeting, said the two heads of state discussed the Cyprus problem, economy and Syria’s chemical weapons in a “very good atmosphere.” The Danish PM also commended the president on Cyprus’ “economic reform achievements and the success of the third troika review,” said Klynge.

Thorning-Schmidt arrived in Cyprus on a Danish Royal Air Force flight, leaving later the same day. During her whistle-stop tour, the PM met with the special coordinator of the Organisation for the Prohibition of Chemical Weapons (OPCW)-UN JointMission, Sigrid Kaag, in Nicosia on the ongoing mission to remove around 1,300 tonnes of chemical weapons from Syria. According to reports, only around 11% of Syria’s chemical weapons have been removed so far. The international community appears to be pinning hopes on Russia, Syria’s backer in the UN Security Council, to lean on President Bashar al-Assad to meet the June 30 deadline for the handing over of all chemical weapons to the OPCW-UN Joint Mission.

Denmark leads a Danish-Norwegian-British task force involved in the removal of Syria’s chemical weapons, overseeing the coordination and movement of frigates and two cargo ships tasked with the high-profile job. Russia and China also provide naval assets to the operation. The 137-metre, 6,500 tonne warship, Esbern Snare first arrived in Cyprus last December and has since remained in the region awaiting completion of the mission.

Asked about the cost to Denmark of maintaining the operation given Syrian delays in meeting its targets, Thorning-Schmidt highlighted the importance of completing the mission, following the death of 1,000 people as a result of use of chemical weapons in the country. The PM said she was “still cautiously optimistic” of meeting the timeframe set. “But it is important that we put some pressure on the Syrians to live up to their part of the bargain…We have a mandate, we have the ship, we have the operational tools to fulfil this task and this is why we are here.” Thorning-Schmidt thanked the president for the “tremendous help” given by the Cypriot authorities to the Danish-led maritime operation to get the chemical weapons out of Syria.