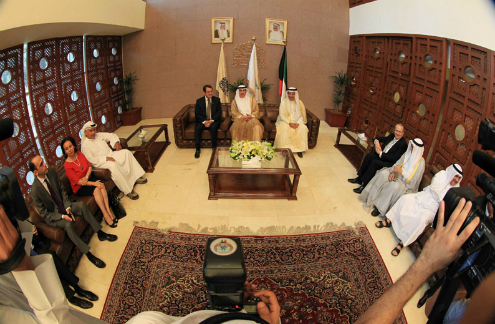 ‘Future bright for business with Kuwait’

President Nicos Anastasiades has completed a two-day official visit to Kuwait during which the two states signed a number of agreements aiming to strengthen ties.

Anastasiades was accompanied by the foreign, finance, and energy ministers, while a number of Cypriot businesspeople also joined the team. The Cyprus representation met with Kuwaiti officials and spoke with local media, with Anastasiades addressing a business forum jointly organised by Kuwait’s and Cyprus industry chambers.

Finance minister Harris Georgiades said Kuwait was interested in investment opportunities in Cyprus but added the government needed to carve up a sensible policy to correct all those factors that had led Cyprus to dire financial straits. “Without a doubt,” the future is bright for more collaboration between the two countries but as long as Cyprus realises it needs to “adopt an extroverted approach, so we can highlight all that makes Cyprus an attractive investment destination,” Georgiades said.

He said the government would not rush into announcing anything that was not specified and defined, alluding to a number of investment promises made over the years – often on the highest official levels – that never materialised. “This is a serious effort to turn into action what we have all termed kickstarting our economy,” Georgiades said.

Addressing the business forum audience, Anastasiades talked of the government’s harsh international bailout in March. “I assure you my government is completely devoted to restructuring and rejuvenating the economy and the banking system as well as ensuring Cyprus remains a reliable partner to businesses and investors interested in international expansion,” he said. The president said the troika of lenders was so far positive on Cyprus’ implementation of the bailout terms and an action plan was in place to strengthen the banking sector. He also referred to a number of favourable tax and development agreements, as well as schemes facilitating obtaining permanent residency for investors looking to be active in Cyprus. Anastasiades also decorated yesterday the consul of Cyprus in Kuwait, Fahad Abdulrahman Abdulkarim Al-Mojil, for his contribution since 1967 in improving Cyprus-Kuwait relations.

During the visit, Cypriot and Kuwaiti officials signed a series of bilateral agreements including cooperation in fighting terrorism, organized crime, drugs trafficking, and illegal migration. Agreements were also signed for cooperation in the areas of tourism, education, and health.